Something to do during a lock down - Create a Repair Pool


With most of the population facing enforced isolation, the opportunity for work on one's layout has risen exponentially to the point where some might be scratching for things to do. Here's a suggestion for a simple task that can have a benefit further 'down the track' so to speak.

Any layout is prone to some damage during normal operations. We reach over the layout to clean track, remedy a derailment or perhaps assist an uncoupling that hasn't worked as it should, and invariably, things get damaged or broken.  For me, the scenic items with the greatest potential for such damage are telegraph and power poles. 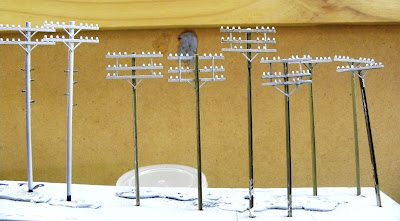 In the days when I had a green skin, one of the things that we would frequently hear about was an entity called a Repair Pool. This was a collection of various items of equipment that could be borrowed by a unit when a like item owned by it required significant repairs. The idea of having spares on hand is not new and we probably all carry a collection of  repair parts such as wheel sets, coupler springs and the like. However, this takes the idea further to complete scenic items ready to be installed.

Over the past 12 months, I have fabricated and painted a number of  extra telegraph and power poles to establish this pool. I needed to make two different telegraph poles, three crossbars for the mainline and a single crossbar for the two branch lines. All power poles have two bars.

Previously, when one of these is damaged, it would probably stay in place until several similar incidents make a repair worthwhile. Now if this occurs, the damaged item can quickly be replaced with a like item and repaired at my leisure. While it may take me as long to get around to repairing the damaged poles, at least visually, the layout is not degraded. The repaired item is returned to the pool and waits until it is needed again.

While I have limited my repair pool to telegraph and power poles, it can easily be applied to other scenic items such as trees or perhaps signals. That said, given the cost and complexity of signals these days, one might need to consider whether the repair pool concept is worth it. 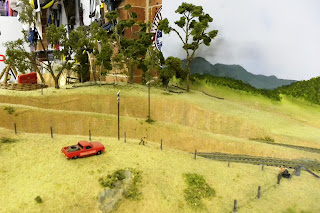 The size of the repair pool is a question that each individual needs to determine. Over time I have tended to settle on 2-3 of each type. From experience, I have learned that the greatest potential for damage, around the junction of the Kingston Plains branch as I attempt to clean the tracks in the two cuttings and the coal mine siding where the four wheel LCH and and CCH sometimes misbehave as they are shunted onto the sidings. This experience has helped me determine the quantities required. 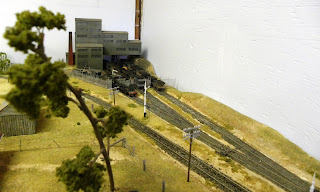 Having said all of this, I have to confess that the repair pool has not be used to any extent in the township of Philip's Creek itself because of the uncertainty of the future of those two modules(see
Contingency Planning ). However, those modules which will continue on into the next iteration of Philip's Creek, the repair pool is used frequently - yes, I'm clumsy!