Well, with the house now sold, the search is on for a new home. A lot time is currently being expended attending open houses but nothing has yet emerged as a viable new home. With Philip's Creek now in store, during this period, I have been investing some time to develop a layout plan which can be used for the next iteration of Philip's Creek. My intent has been to use existing modules, where possible, supplemented by a few new builds.

From a family perspective, this is a downsizing exercise with the intent to move to a single level house. The irony is that while the family home may be going to a single level, Philip's Creek must become a multilevel layout if I am not to forego too much of its basic concept, a section of main line with several branch lines feeding into it.

While the previous iteration of Philip's Creek fitted into one third of a three car garage, circulation space was tight. Now as I move, most probably, to a two car garage, there will also be other workshop items that may need to be accommodated in the same space. The average double garage for the houses we are investigating is about 5.8m x 5.4m, so my designs have been focused on fitting the next layout into a 5.4m x2.7m space.

The sketches below indicate the current concept showing where the existing modules will be incorporated. Hopefully, other garage items can be stored in the space below the lower level and bought out when necessary. In the event that we purchase a house with a larger space, elements of the plan may be extended -  time and finances will tell. 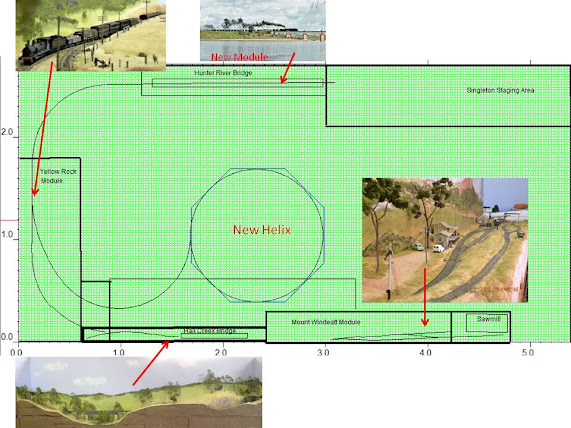 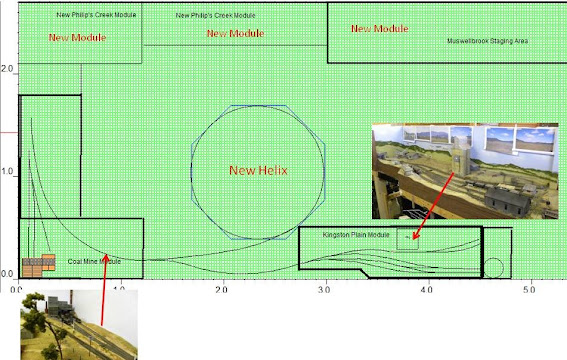