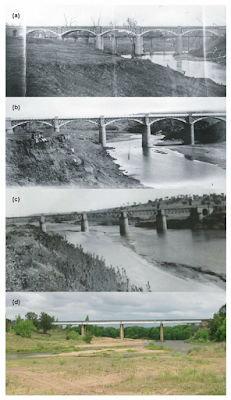 Despite the closing comments in my last post ( Contingency Planning ), I have started work on a model of the Hunter River rail bridge near Singleton. How this model will be integrated into Philip's Creek has yet to be seen and, probably in the short term, it will remain as an independent diorama and possibly be used as a separate DCC programming track.

The current bridge is the third in that location. Ray Love in his book 'Days of Steam' provides a brief description of the three iterations. These are also shown in the montage opposite found on the internet (https://www.researchgate.net/figure/The-Hunter-River-at-the-Singleton-rail-bridge-in-a-1861-b-1866-c-1963-and-d_fig4_48381152) The first bridge, a five-span laminated timber structure (Images (a) and (b)) was built in 1866. It was replaced in 1902 by a five-span riveted steel Pratt truss structure (Image (c)). In turn, this bridge was replaced when the line was duplicated with a steel girder structure (Image (d)). I'm not sure when the duplication took place but I understand that it was well after my modelling time period of the late 1960s, early 1970s. Consequently, the 1902 Pratt truss version is the subject of my modelling effort. Since the post was first published, Col Hussey provided some additional information on the 1902 version which can be found in the comments section below.


My research to date for this project has been restricted. Life has got in the way preventing a visit to the Australian Railway Historical Society so I have relied on two photos, extracts of which have been reproduced below. The first photo showing a 60 class hauling a load of LCH/CCH wagons is from 'Northern Exposures' (p 128, photographer Greg Triplett). 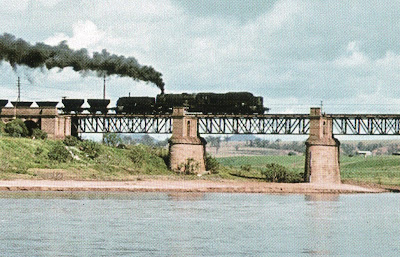 The second showing a 36 class leading the Brisbane Express over the bridge is from Ray Love's book 'Days of Steam' (p67, photographer Ray Love). Ray's photo, in addition to showing detail on the truss arrangement and weathering, also gives a good indication of how the original piers were modified to accommodate the 1902 bridge. 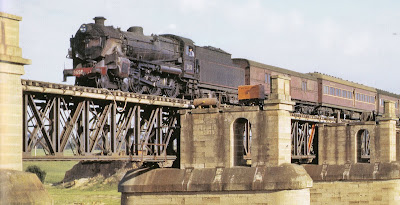 I used these photos to estimate key truss dimensions by comparing the bridge elements with the equivalent HO scale locomotives.These were used to create a template for the fabrication of first two trusses. Each truss was built using styrene only with the major components of each truss using various  profiles all around 3.2mm wide. Cross bracing was a combination of angles and flat sections. 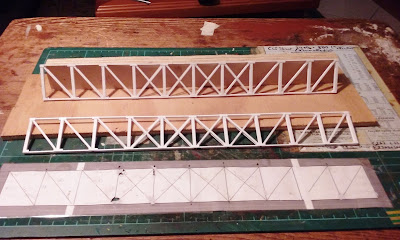 These two trusses will form one span of the bridge and have been used to develop construction techniques. They were also used to test  each span's load carrying capacity.  . 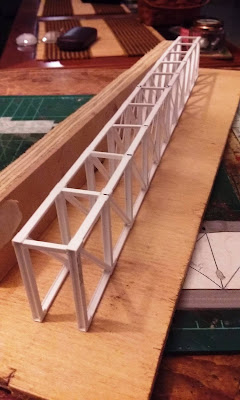 The following three photos show the construction sequence  The internal bracing was the most difficult to fabricate. I only fitted one of these every second bay and I can't determine from the photos whether that spacing is correct. However, the lateral bracing of the top chord is the most critical to resist the bending failure of the truss and this was easy to fit. 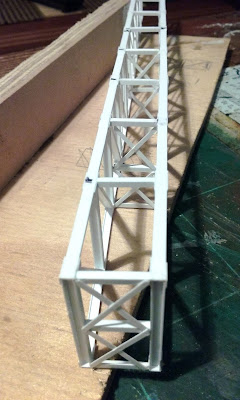 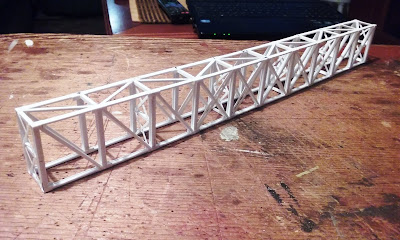 The final stage to confirm the viability of trusses was the load test. In something reminiscent of the famous load test of the Sydney Harbour Bridge albeit with significantly less potential consequences of failure, I used 6018, as the heaviest load the bridge will carry, to test the capacity of the span. It passed! A slight vertical deflection was noted but I don't think this will have any significant impact on the functionality of the bridge. Incidentally, I understand that the actual bridge was restricted to a single 60 class, so it's probably close to the mark. 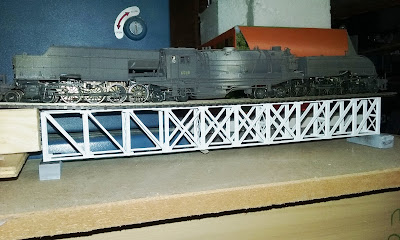 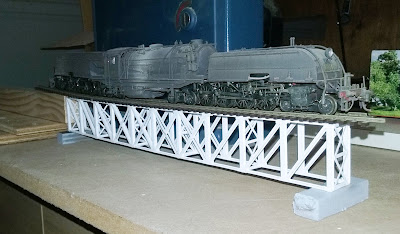 I want this bridge to fit onto a single 1800mm module but  with each span measuring around 340mm plus the substantial abutments and approaches, a five span bridge will be too long. It's probably time to apply some modeller's licence and reduce the number of spans from five to three. But more of that later. In the meantime, it's time to build more trusses.