One of the consequences of the mess making described in my last post was that a number of trees had to move. Gum trees were relocated to other heavily timbered

areas but a row of trees along the road leading from Philip's Creek was ditched (see adjacent photo). These trees had been a generic commercial product of no specific prototype. The only reason that they had been installed on the layout originally was because they were a gift from one of my children. However, over many years, these had degraded to the point that they were no longer fit for purpose. They had to go and question turned to what would replace them.
One possibility for a replacement tree was the ubiquitous poplar. One commercial website describes them as:
"Large, stately trees which are widely used for street and avenue plantings, parks and gardens, large properties, shelter belt planting and along driveways. Poplars are probably best known by the stately Lombary Poplar, widely planted in temperate Australia"
I have been aware of poplars from a very young age. Probably, the earliest memories from the 1960s were the extensive plantings on the Federal Highway and around Canberra. That said, I don't recall seeing many poplars on exhibition layouts but maybe I was focused on other things. I was able to purchase two models of poplars recently but wasn't too happy with the leaf colour or density of the foliage. So I decided to have a go of making a few to supplement the commercial product. 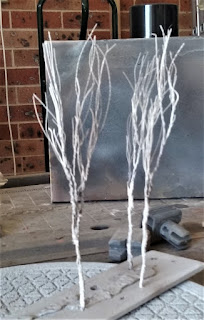 Construction of the trunk and branches was fairly simple using the common twisted wire technique. I used two sizes of wire; about six strands of 0.5mm diameter for the trunk and main branches, and a very fine fuze or armature wire intertwined for the smaller branches. The twisted wires were given a thin coat of Shelley's filler and each tree was sprayed with grey primer followed by a light spray of burnt umber.
In keeping with my usual practice foliage was fixed to the branches using spray glue but I'm sure readers will have their own preferred techniques. I used Woodland Scenics course turf - light green to simulate the leaves. 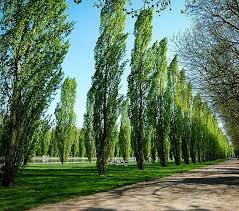 With the benefit of hindsight, I probably didn't need such a long trunk as the foliage on prototype trees starts at ground level as the photo opposite shows.
The process was a bit laborious but not difficult and I'm reasonably happy with the result, although I note that the foliage on the two commercial trees is thicker (see trees 1 and 4 -left to right on the photo below).
With the small stand of poplars finished, it's time to get back to the more extensive but certainly more mundane fencing of the newly terra formed area. 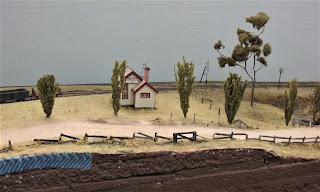 Email ThisBlogThis!Share to TwitterShare to FacebookShare to Pinterest
Labels: poplars