About three weeks ago, a new 30T class, 3090, joined the roster at Philip's Creek. This is the second 30T class locomotive in use on the layout. It's now just over two years since 3088 was introduced into service. ( https://philipscreek.blogspot.com/2018/05/introducing-3088.html ) 3088 is an elderly brass locomotive and notwithstanding my early optimism, it has proved to be a bit unreliable. Despite adding a stay alive to the decoder, at times, performance has been jerky and inconsistent. I sensed that some part of the running gear might be fouling but could not locate a specific problem. Often it seems that I have to 'run in' the locomotive for about 15 minutes before it could be trusted to haul a train to Kingston Plains without incident. It was this situation that provided the motivation for the acquisition of a more 'modern' 3090. 3088 hasn't been consigned to 'Rotten Row' but it probably will spend a bit more time in the workshop 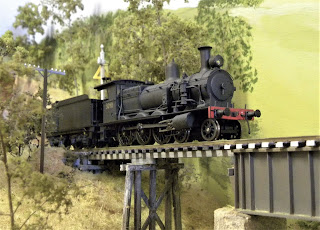 As most followers of the NSW prototype will recall, a model of the 30T was released by Wombat Models in 2018. The initial release was limited to the six wheel tender version but last year, models of locomotives with the larger ex 50 class bogies tenders were added to the range. 3090 is one of the second release. The model arrived very quickly (within two days of the order being placed) and was given a good run-in on DC before the planned decoder install. As I read the instruction, I realised that I was facing another 21 pin installation. My one previous experience with a 21 pin plug had not been good ( https://philipscreek.blogspot.com/2015/02/jinxed-bringing-45-class-into-service.html ) so it was with some trepidation that I commenced this installation. I still haven't made the jump to sound and when I tried to source 21 pin versions of my usual preferred decoder brands, I found they were in short supply. It seems that the pandemic has been impacting the supply of decoders.  I ended up purchasing a DCC Concepts product. As well as the 21 pin connector, this particular decoder also includes extension wired to an 8 pin socket. This gave me some comfort that, if everything turned pear shaped, I could at least cut off the 8 pin socket and use the wires to do a basic four wire connection. However, that contingency was unnecessary as, this time, the installation went well, no bent or broken pins and the locomotive was running on DCC in short order. 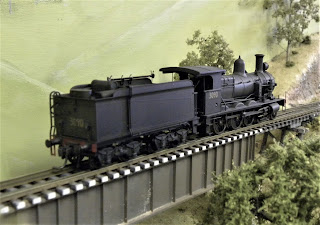 As is usual these days, most of the electronics are located in the tender which was easy to access by removing two screws holding the superstructure to the chassis. The instructions indicate that there is sufficient room to include a speaker in the tender as well as some additional weight to the underside of the tender superstructure. I'm sure it's been done but I thought things were a little tight. I believe that adding some extra weight to the tender is advisable, so lead strips has been glued onto the coal bunker and covered by coal.
My initial testing indicates that the locomotive runs smoothly and handles prototypical loads without difficulty even with the extra weight in the tender. 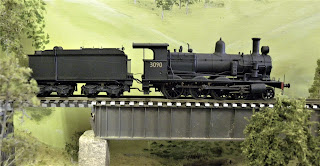 Not surprisingly, I have chosen to weather 3090 as it was in Upper Hunter Valley around 1970 when it replaced 3088 working the Merriwa branch line and other local services. Photos taken around this time show a locomotive in a reasonably clean condition compared with a more degraded appearance a year or so later when working out of the Port Waratah locomotive depot. Therefore, my focus has been to dull down the gloss new model appearance and overlay a very light grime to match some contemporary photos.
The model also includes a number of small detail parts which have yet to be added. The instructions didn't identify where these should go, so a closer scrutiny of photos will be necessary. A crew has also yet to be added and I'll probably target two from the Andlan Models 3D printed figures range which really look great once painted.
As 3090 replaced 3088 in the Upper Hunter Valley I assume that the two locomotives were  never seen together. However in my slightly altered universe, 3088 and 3090 will both operate around in and around the area and may occasionally cross at Philip's Creek.