It has been a busy few months on the work front and this has limited the time available for modelling activities. With retirement looming, it seems as if my ‘working self’ is making sure there is one final bout of frantic activity before being consigned to history. However, the recent Queen’s Birthday long weekend did offer some respite, at least for two of the three days.

On the Saturday, I took the opportunity to visit the Epping Model Railway Exhibition at Thornleigh. It was another great exhibition from that club with a number of layouts that I had not seen previously. There were some very impressive layouts showcasing a very high standard of modelling. Congratulations to the organisers.

Suitably inspired, on Sunday, I felt motivated to tackle a few well overdue tasks on Philip’s Creek. I finally managed to finish the fence separating the village from the railway easement (http://philipscreek.blogspot.com.au/2012/11/a-waste-of-time.html). Then, it was time to tackle a job that had been hanging around ever since the scenery was laid on the first sections of the layout; the gap between the two original modules.

Previously, I had tried to mask the gap by locating the pub and road on either side of the gap in the hope that, visually, it would be overwhelmed by other detail. I suppose that idea worked in part, because something else always seemed to have a higher priority. 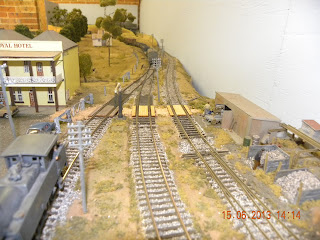 Anyway, filling the gap was not difficult, and I then started to cover the work with basic scenery, knowing that some day it may have to be broken up if the modules are separated. For the area between the tracks, I planned a mix of gravel, dirt and grass. However, after laying the ‘dirt’, I suddenly realised that I had created a path between the fettler’s shed and the Royal Hotel. The fettlers were ecstatic. Not only did they have a shortcut to bring in tools and equipment but they now had a quick and direct access to the pub for lunch each day.

So instead of looking for an appropriate scatter material, I went searching for one of the Laser Rail Bits timber level crossing kits that I had purchased a few months ago. One kit had sufficient pieces to allow me to create a pedestrian crossing point across three tracks. This very simple accessory was laid easily and all that was left to do was weather boards and build up the footpath level. 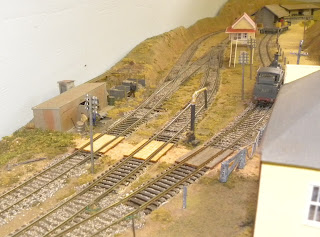 I decided to try dry soft pastels after reading a few posts on the subject (http://bylong.blogspot.com.au/2013/01/weathering-with-timber-pastels.html and http://southernline.blogspot.com.au/2013/05/weathering-pastels-and-round-piles.html). The two photos of the crossings show the timber on one track with a mix of greys and brown pastels that was then rubbed with a piece of paper. I may have overdone the rubbing because the timber planks now look very homogeneous. I'll try a few different approaches on the next two tracks to get more differentiation between the planks. Probably also with the benefit of hindsight I should have weathered before installing them.

However, it has created a nice little feature that, to be truthful, I hadn't visualised previously and all because of a bit of motivation from the Epping Model Railway Club - thanks gents.