The main justification for the short Mount Windeatt branch line on Philip's Creek is the Parker Brothers Saw Mill and its supply of sleepers for NSWGR as well as timber products to other markets.

As a consequence, the release of InFront's 18ft sleeper wagon  caught my attention, and I lashed out and purchased ONE at the Thornleigh exhibition some weeks ago.  My intention was to construct this one as a test and then purchase a few more when finances permitted. Unfortunately, the latest version of InFront's website advises that the wagon is now out of stock. Nice plan - fail! 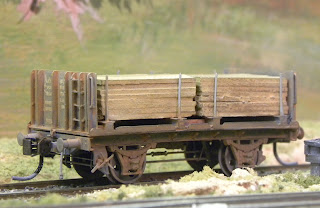 It's a great kit with some fine detail. I thought the instructions included in the kit were basic but the manufacturer's website included additional photos that provided a useful supplement. Unfortunately, now that the model has been 'sold out', these photos have disappeared.

While the assembly of the kit was uncomplicated, I wasn't prepared for the partial disintegration of the Austrains chassis. It seems that everything on the chassis was a press fit and, progressively, both buffer beams came off, closely followed by the brake cables coming adrift. A bit of superglue fixed the problem but getting things back together required younger eyes and more dexterous fingers than my clumsy digits.If I was building another kit, pre-emptive gluing of the chassis components would be a requirement.

I also wasn't that happy with the decals when they were applied but I suspect that it had more to do with my technique than the product as supplied. 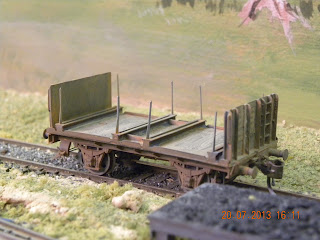 The colour photo on the website inspired me to be fairly generous with the rust colourings as part of the weathering. I understand that the wagons had a fairly hard life. However, it's also clear from the photo of the sleeper load that I have more work to do on the timber.

All in all, a nice addition to Philip's Creek!

When I decided to change to DCC, the NCE Powercab was a good choice and I haven't regretted the purchase. However, when I made the changeover, I was living in England with only a portion of Philip's Creek residing in the attic.The 2m cable between the controller and the socket that came with the Powercab didn't pose any problem, but the limitations soon became apparent when we returned to Australia and Philip's Creek was reconstituted as a single layout.

As it is currently constructed, Philip's Creek almost fills a single car garage, around 5.5m x 1.8m with several aisles to facilitate access. I bought a longer cable but was warned that its length (3m) was about the maximum before electrical losses would impact on the efficiency of the system.  While it did allow greater reach, areas of the layout, particularly the two staging areas, were still well beyond the reach of the tethered controller.

With ambitions of further extensions and the prospect of retirement potentially providing time to achieve these ambitions, it was time to resolve the problem. The declining Aussie dollar added a further imperative. Some research on the internet and a couple of chats at the Modelling the Railways of NSW Convention at Loftus indicated that the best solution for me was a wireless arrangement and an additional cab controller.

Installation was fairly simple, apart from me putting one of the batteries around the wrong way in the supplementary controller. Otherwise, it was very much a 'plug and play' arrangement and. I can now use a controller at any point of the layout. 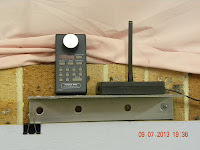 The supplementary cab is very basic and easy to use. However, I have noticed a delay between when a  locomotive has been selected and it is ready to operate. In reality, the pause is probably no more than a second or two but in this day and age, it seems like a very long time. There was one instance when it took three attempts to select a locomotive. I'm still learning and I don't know if that is normal.

As I mentioned earlier, this purchase is an 'enabler' that will facilitate the the expansion plans, so roll on retirement! Maybe then, I'll also get around to covering the white styrofoam with a fascia.
Posted by Phil White at Tuesday, July 09, 2013 6 comments: