The challenges of modelling gum trees

With a significant amount of time unavailable for layout construction activities, I was scratching around for a few relatively simple tasks that I could undertake until I can get more time to focus on the construction of my branch line terminus. Since my last post on that topic  "A Place for Everything"  back at the beginning of March very little progress has been achieved, so I needed something to demonstrate to myself that I wasn't ignoring the railway altogether. With more than enough rolling stock and no need for additional motive power, at least until a 30 Class (T) finally comes onto the market, I decided to return to the construction of a few trees. With two heavily timbered areas on Philip's Creek, I can never have enough trees. 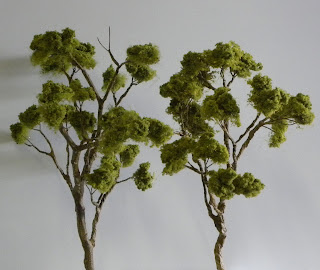 I have built a number of gum trees using primarily using adaptations of the twisted wire technique. This has been described in many on-line references, blog posts and in print. For me perhaps, one of the most helpful was Ross Hurley's article in the June 2014 edition of AMRM. In his article, Ross made the point that most gum twigs are bent and for that reason, he preferred to use twisted wire for whole tree structure.

The problem that I have with the twisted wire technique is that I can never find the right balance of 'no more gaps' or a similar product. Too little and I get a tree that looks like the one I photographed in 2012  "Twisted Trees", too much and it doesn't seem to have the right texture. I know other people can achieve this balance, but I have struggled. 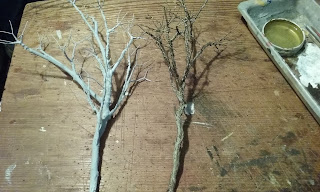 Motivated by Ross' article, I once again tried a fully twisted wire tree. Certainly straighter than some earlier attempts but still, I felt the texture was not quite right. To resolve this for my second effort, I have revisited the idea of using twigs but only for the main trunk(s) and larger branches. The photo opposite shows both attempts, the full wire version is on the right, and yes the hybrid does have a bend! 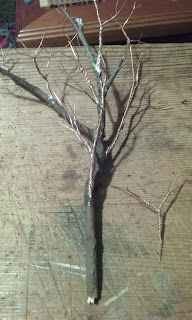 So the first challenge is to find a small stick or twig usually with a diameter of around 4-7mm that is relatively straight but with sufficient taper in the diameter so that the tree is not excessively tall. The smaller wire branches are twisted with one strand of wire protruding at the bottom of the branch for about 12-25mm. This was inserted and glued into a hole drilled into the timber at an appropriate location. 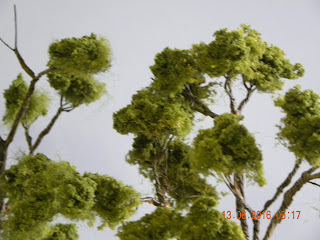 The next step is the foliage. Previously, I have used either the Woodland Scenics Foliage or the Foliage Clusters. For my latest effort, I tried to combine them applying the foliage product first and then gluing small pieces of the foliage clusters.   While these seem to work from a distance, they don't seem to bear closer scrutiny. It is relatively easy to get the 'parachute canopy' effect of the gum trees, but again, the texture for the multitude of hanging leaves doesn't seem right. A impromptu survey at Epping Model Railway Cub's Thornleigh exhibition over the June long weekend indicates that there is a wide variety of techniques to simulate the foliage, many better and some worse than what I have been doing. So the second challenge is to get the foliage right, something that requires a bit more work on my part.

The final issue is one of quantity. These two trees were not quick to produce and, even withstanding those already in place,  it's going to take some time to achieve the density of trees usually found in the Australian bush.So the third and final challenge is to find enough time (and motivation) to build sufficient trees, or enough funds to purchase products that are commercially available!