My AndIan Turret Tender has now entered service behind a freshly painted and renumbered 50 class. 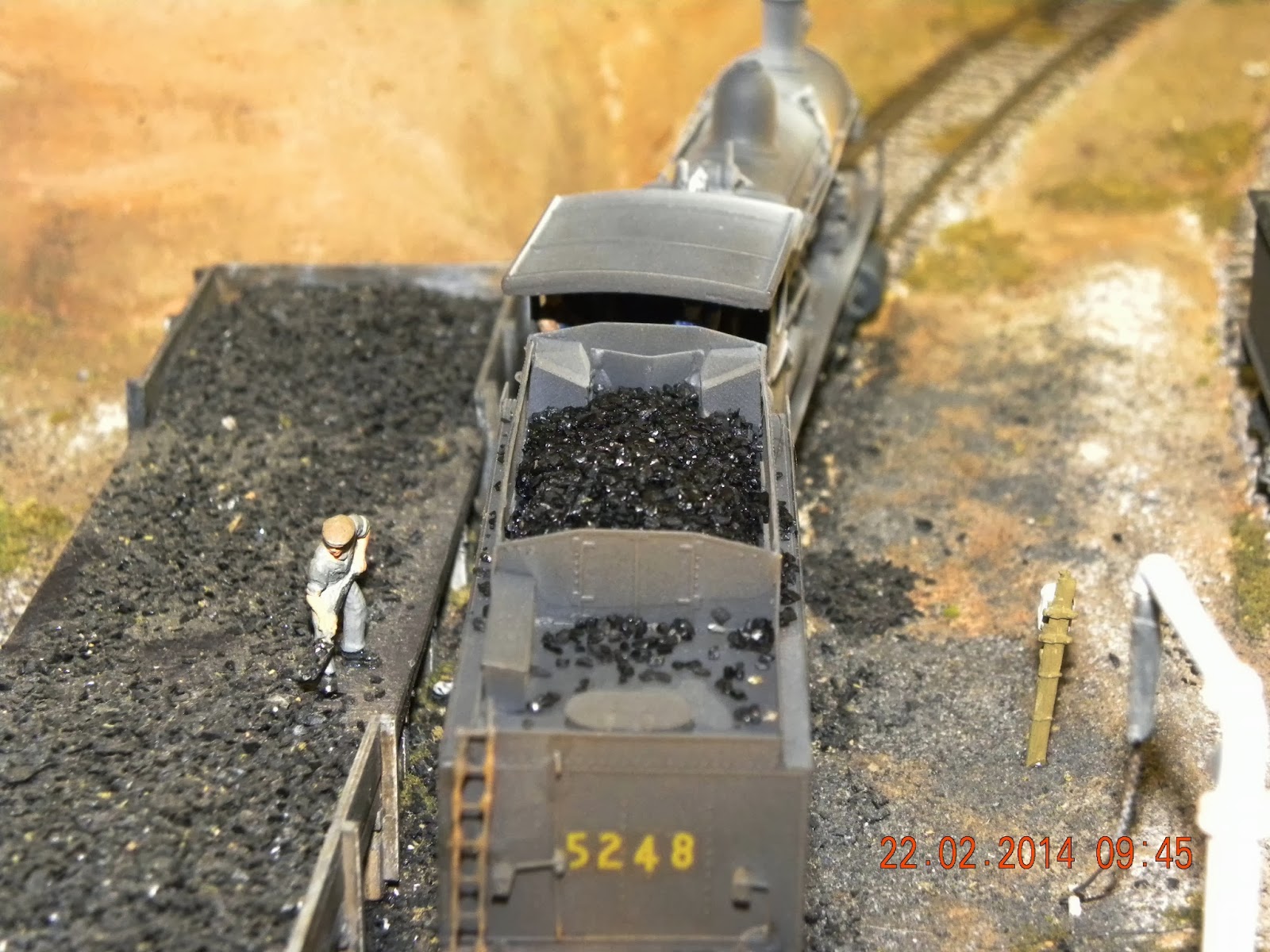 My earlier post on the tender (http://philipscreek.blogspot.com.au/2014/01/the-andian-5000-gallon-turret-tender.html) showed the model when most of the basic construction had been completed. A more detailed construction sequence is being posted by Peter Hearsum at http://burrowa.wordpress.com/ as he undertakes a similar project.

Thanks also to AndIan Models for providing some spare ladder sides that allowed me to have a second attempt at the ladder. 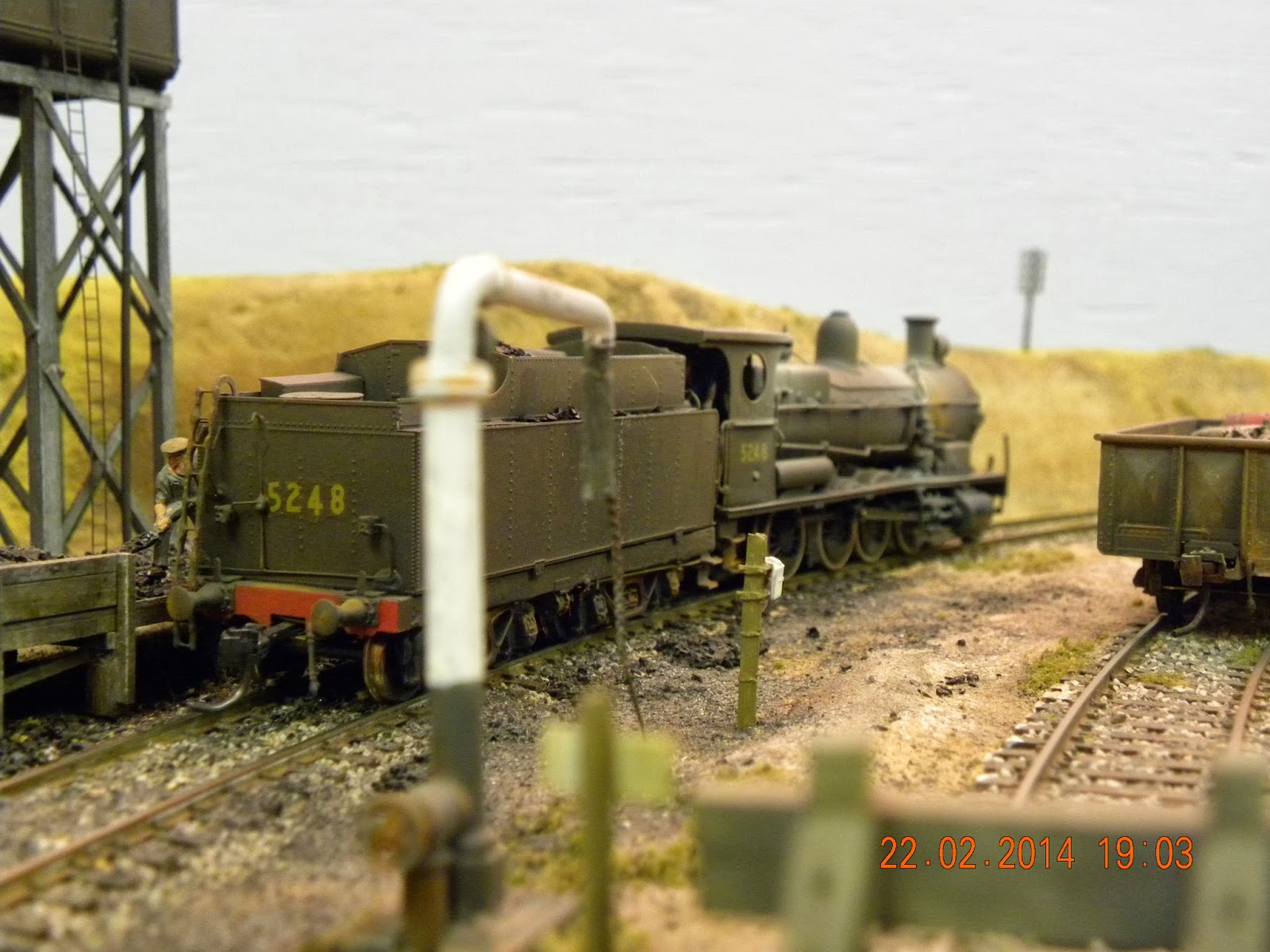 Painting was fairly straight forward. Because the locomotive was a metal DJH kit, I was able to strip the existing paint using an acetone based nail polish remover. For plastic kits, I have found the non acetone products work well with less risk of damage to the plastic. It took a few attempts but most of the the surface was back to bare metal. The locomotive and tender were both sprayed with a Floquil weathered black and then a light coat of  Humbrol rust wash. Most of the weathering was completed with an airbrush but some rust powder was used in a few additional places. 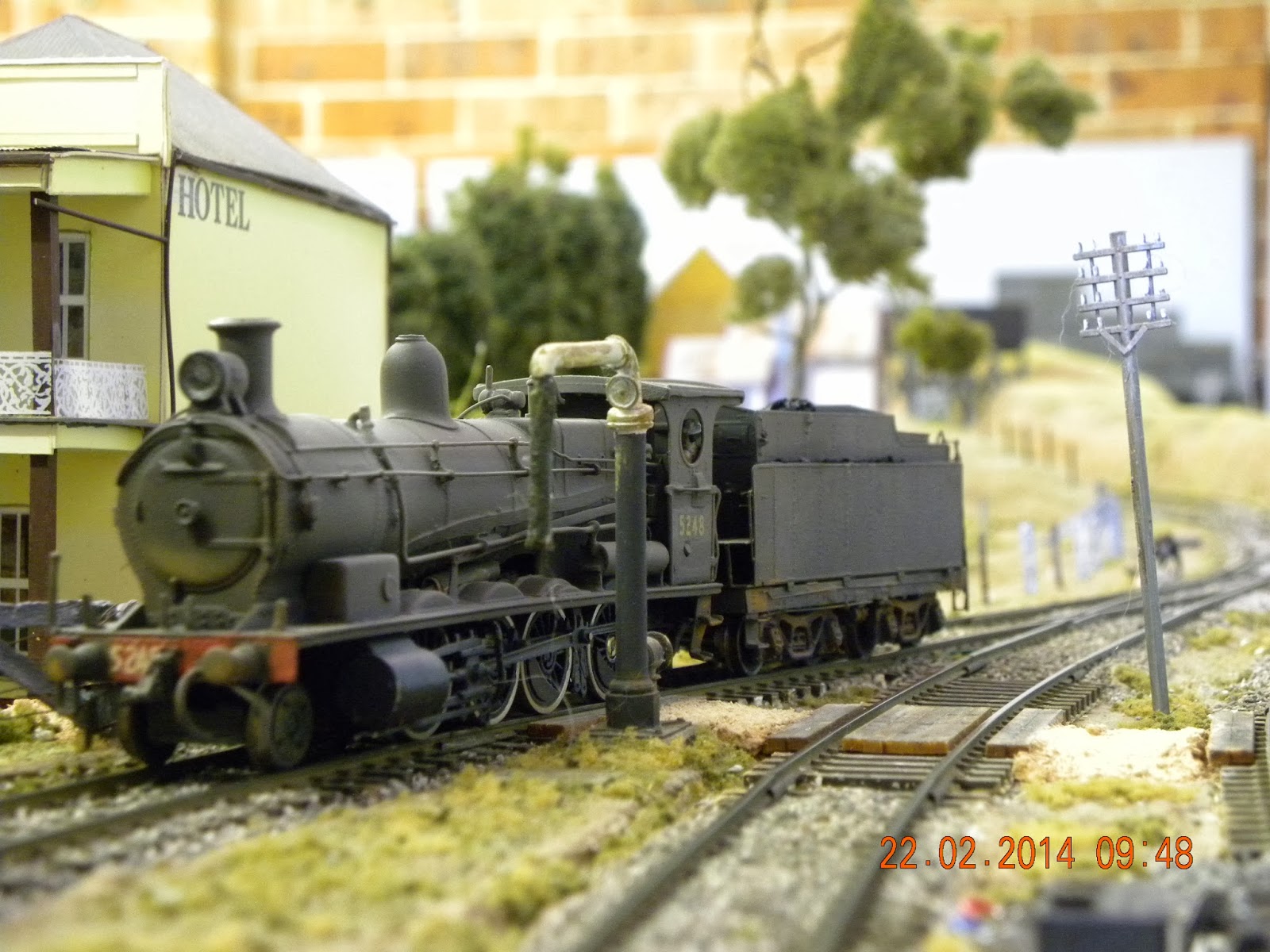 All of the tender wheels were fitted with phosphor bronze wipers and a permanent electrical connection has been made to the locomotive. I had intended to fit additional pickups to the locomotive but the chassis configuration seemed to make this difficult with the materials I had to hand. A project for another day!

As an aside, I found it necessary to fit a long shank coupler to prevent buffer lock on some of my tighter curves.

Now, what to do with the old tender? In the short term, I'll probably de-coal it and leave it on a siding. However, if in the long term, I manage to purchase a C30T, it may again be pressed into service.

Brad H, in a recent post to his blog (http://armchairmodellerdownunder.blogspot.com.au/2013/12/opinion.html), discussed some criticisms levelled at a layout featured in the December 2013 issue of Model Railroader. One of concepts that attracted adverse comment was the idea of ‘modelling the ordinary’. Brad’s discussion went on to address other issues, but I realised that the phase ‘modelling the ordinary’ put some context to what I am seeking to achieve with Philip’s Creek. 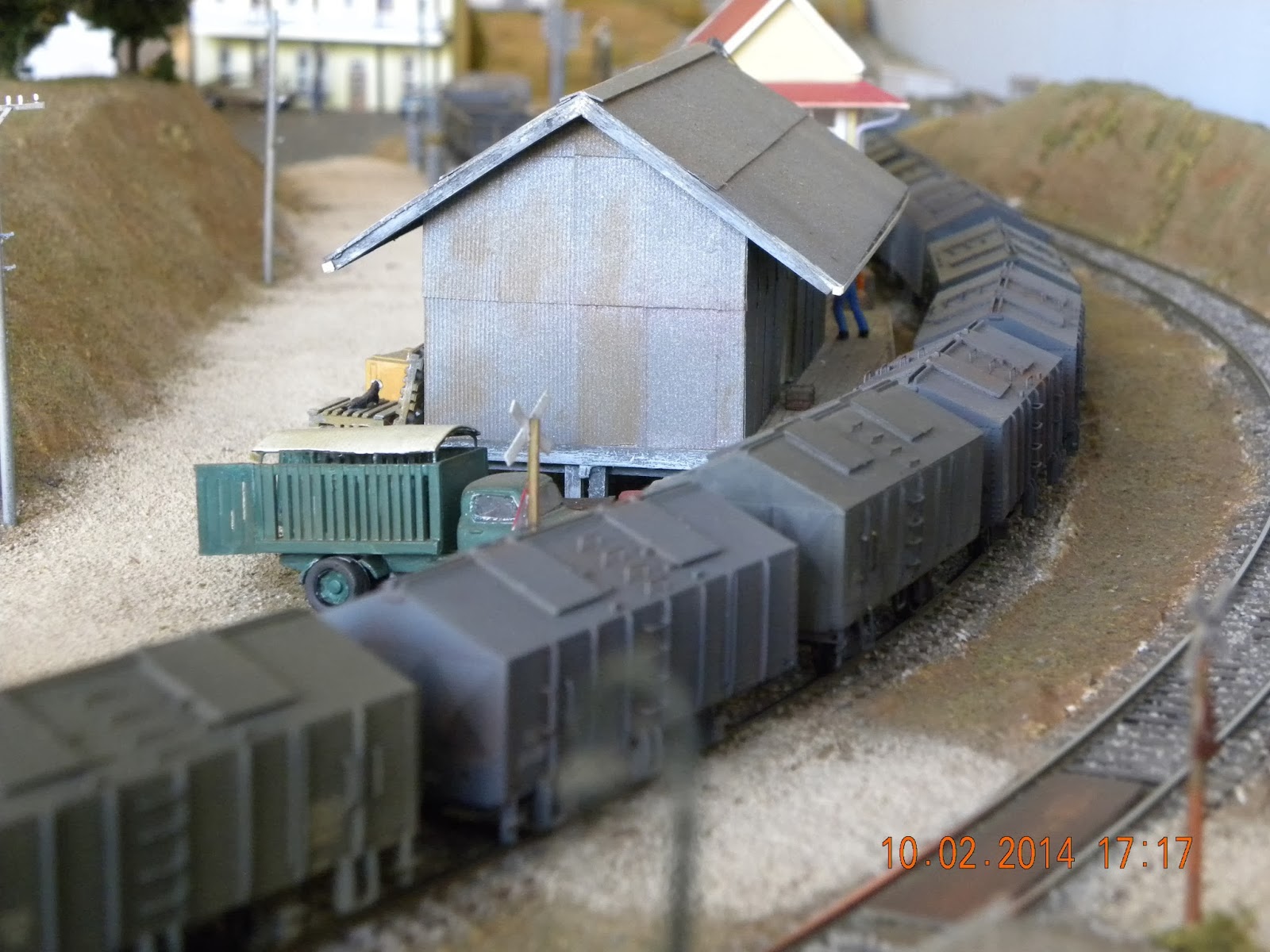 As an aside, the contribution of those individuals who photographed what was ‘ordinary’ at the time and have made these available over the years must be acknowledged. Without their efforts, modellers such as myself would have little to work with other than the fragmentary memories of childhood.
For some, the term 'modelling the ordinary' may seem a disparaging way to describe their pride and joy. However, as I pondered the concept, I realised that I have been doing it for years by implicitly applying a simple test to determine the ‘ordinary’; what scenic features are included and what should be excluded. I endeavour to ensure that landscape features, buildings, the flora and fauna are not so unique as to attract the attention of an average observer in the late 1960s. For me, this means no grand buildings, no major or unique engineering features or infrastructure, and geographic features that are non-specific and generic to the Upper Hunter.
Having said all of this, there are at least two instances where Philip’s Creek falls short of the criteria that I have just outlined. 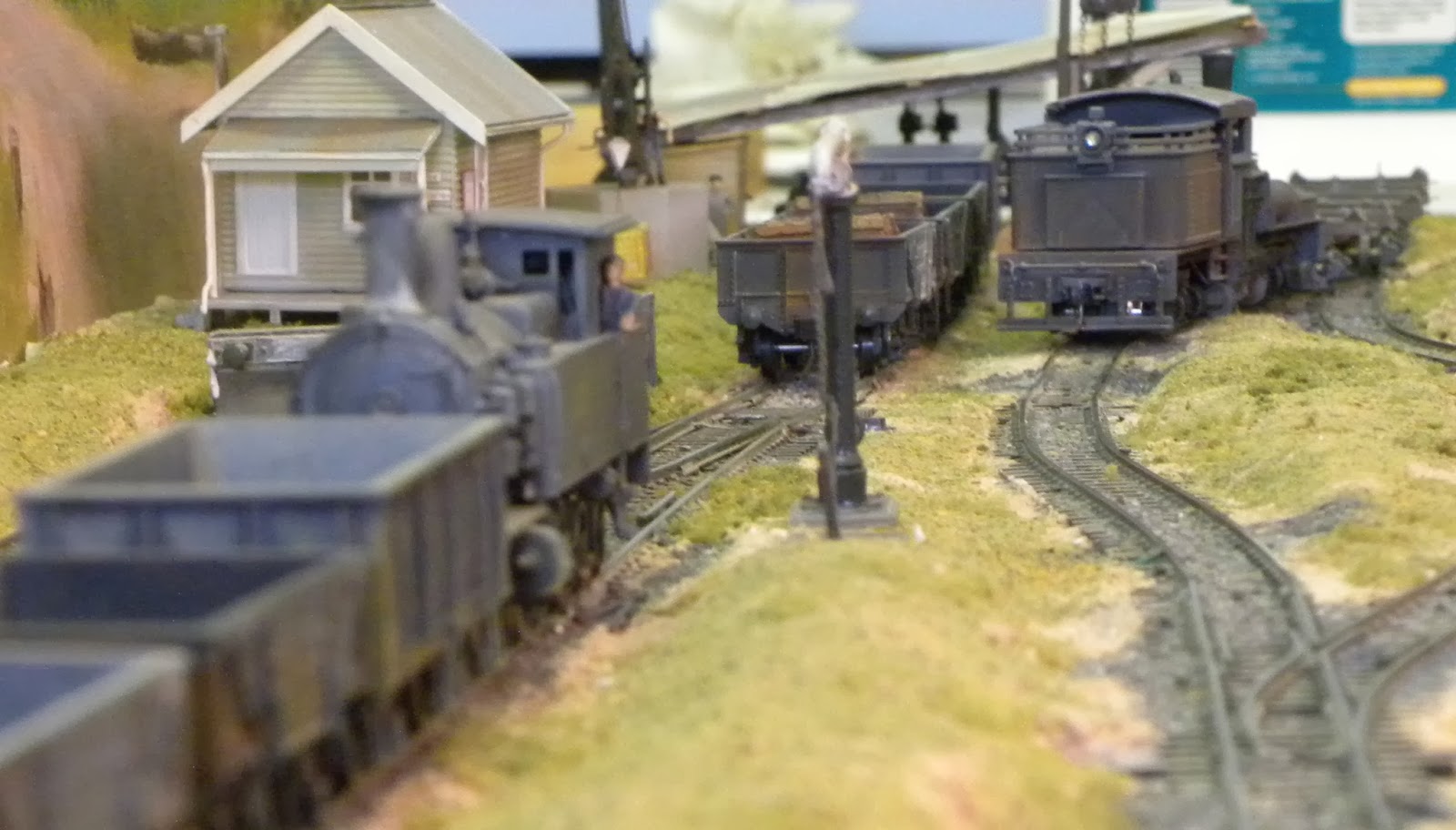 The first is the narrow gauge logging tramway. I cannot find any examples of a logging tramway in around the Upper Hunter although I’d be very happy to be corrected on this. I am also not aware of any logging railway or tramway in NSW that was still an operating entity by the 1960s. I admit that its inclusion was an indulgence and a way of combining two railway interests. While the locomotive (a Roundhouse Shay seen on the right of the adjacent photo) remains operational, the tramway will remain as it is. However, if it does ‘give up the ghost’, then tramway will be converted into what was more likely by the late 1960s, a derelict relic of a bygone time. 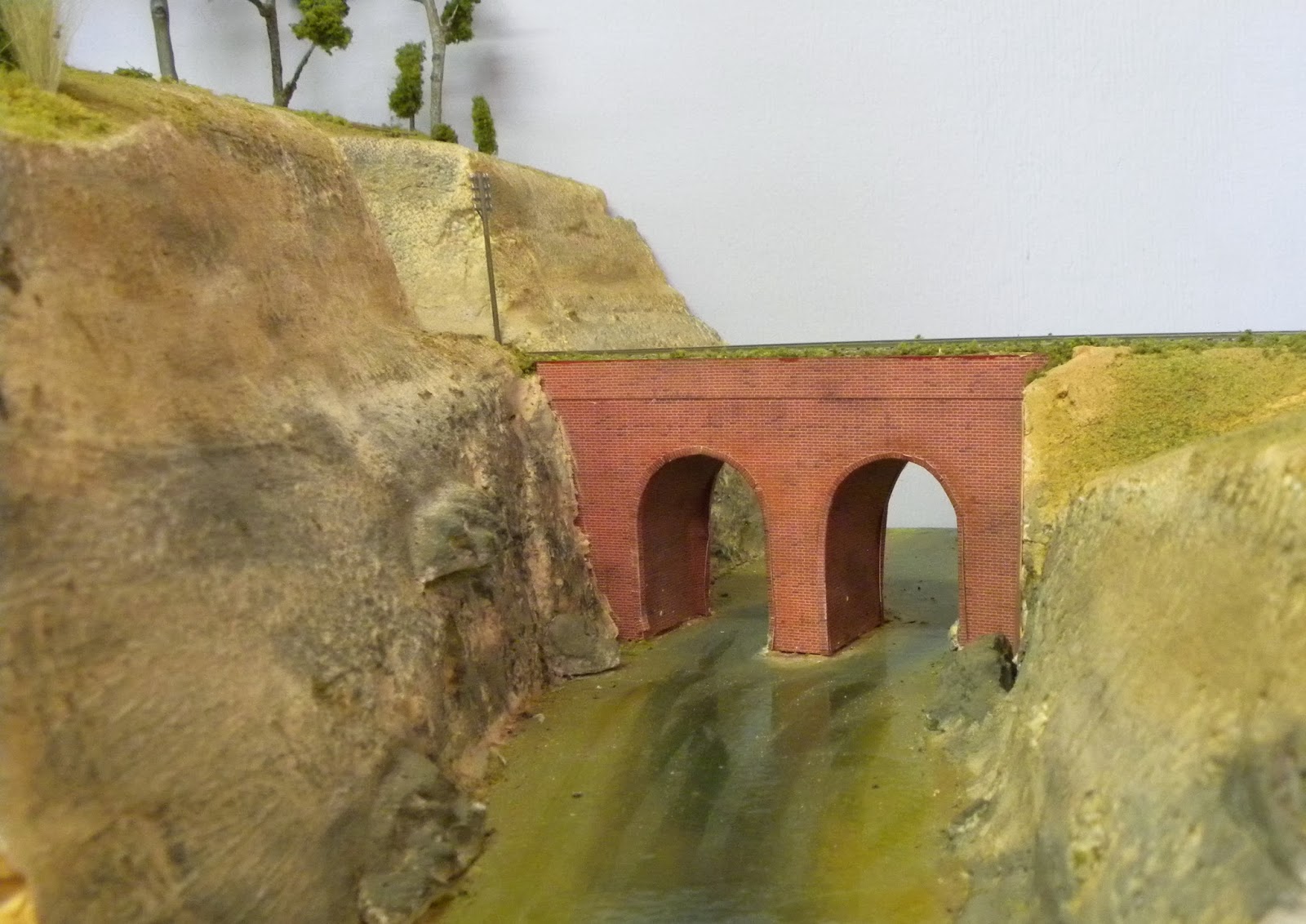 The second is the gully and viaduct that do not seem in keeping with the typical undulating terrain in the Upper Hunter. Originally, it was installed as device to hide the entrance to a staging area,  but the river gully seems too precipitous and I am not aware of many brick viaducts being used as a means of crossing such an obstacle. Again, I'd be happy to be corrected on this. With the installation of the new scenic module, the original reason for this terrain feature has ceased and so it will be replaced. The major river will filled and become a small creek with a culvert passing under the track formation.
Well, that's the intent. Now all that is needed is the courage to start the demolition!
Posted by Phil White at Thursday, February 13, 2014 6 comments: