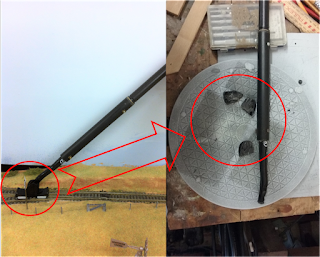 Well, it's the end of my Woodland Scenics' 'Tidy Track' cleaner. Just under five years ago, I wrote the first of three posts about this tool. Two and half year years later, the shaft broke (http://philipscreek.blogspot.com.au/2015/10/it-broke.html ) and I fitted a sleeve that allowed it to continue to function. However, normal usage over the next two years saw the pivot point gradually break up, get repaired and break again until it finally disintegrated last week. The concept of the tool was good but, clearly, it was not sufficiently robust for my track cleaning techniques.

Fortunately, a few months ago, I had stumbled across two YouTube segments on Ken Patterson's 'What's Neat' column for last January and February. Both discussed how build a similar tool using a standard half inch drive breaker bar. The links to these are: 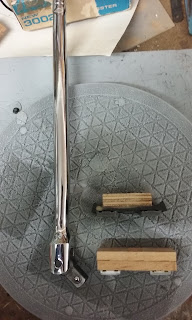 Both segments are fairly self explanatory, describing how to fabricate a shoe that can be fitted to the breaker bar. I fashioned two versions, one all wood and a second using the base of the 'Tidy Track' tool. I fitted the existing cleaning pads to the tool heads rather than a separate cleaning pad that Ken used only because I had a few spare. His finishing techniques are also significantly better than mine.

The breaker bar was purchased from Auto One for around $20 and each base took around an hour to fabricate excluding curing time for glues. Noting that 'Tidy Track' retails for something between $60-$70, it probably represents a significantly cheaper option.

One thing was evident as soon as the tool was put into use. The weight of the bar made the tool considerably heavier than its commercial equivalent and negated the need for the additional force that I had felt was necessary for the effective use of  the Woodland Scenics tool. 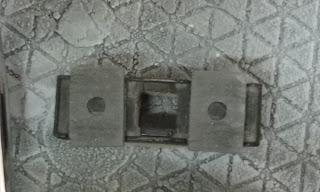 Ken's February column also noted the impact of the height of the breaker bar's pivot point and the potential to trip up the cleaning head. My experience reinforced this observation. The higher the pivot point above the track, the longer the lever arm and the greater the potential that a minor defect in the track will cause a snag in the movement of the cleaning head. 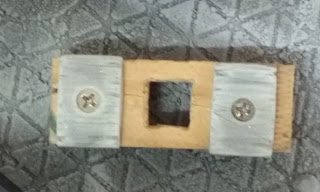 And so, after nearly five years of adaptions, tweaks and repairs, hopefully, now I have a solution that will work reliably without disintegrating periodically.
To close on a very different subject, readers might like to rewind Ken's January video back to the 2:30 minute mark. Here we see an impressive model of a Northern Pacific Challenger steaming majestically through a nicely timbered scene. However, it is not the locomotive that catches one's attention but rather, his moggy lurking among the trees as this image from the video shows. At the risk of a very poor pun, a very different scenery challenge! 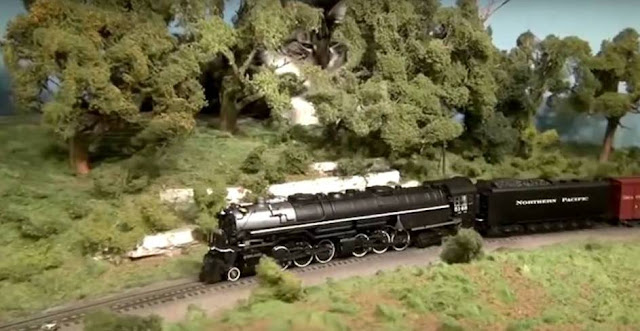