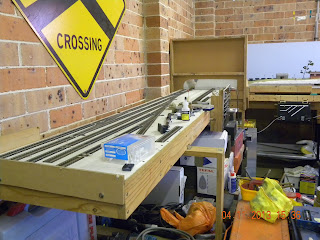 That old enemy of most railway modellers has resurfaced at Philip's Creek. I am talking about that perennial problem, a lack of time. In reality, it never really left. I had anticipated that with retirement from the full time work force, 'lack of time' would be a thing of the past. Wrong! The 'Honey Do' has expanded exponentially and the needs of elderly parents has also assumed a higher priority. These combined with a few days of part time work have meant that the time available for some solid work on Philip's Creek is very scarce. 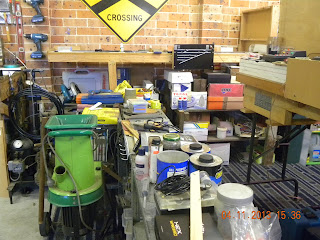 However, slowly, Philip's Creek is being prepared for its first expansion since about 2005. I managed to scrounge some time on a weekend to construct a new module that will be inserted between the coal mine area and the 'Muswellbrook and regions north' staging area. The module will allow a slightly longer run on the main line and also include the start of a branch line that may become an upper layer, depending on how much interference there is from the old enemy. The staging area will be turned through 90 degrees and placed on top of the shelving shown in the photo to the right. 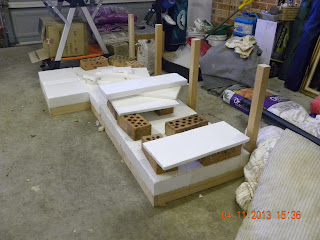 The module follows my usual practice of a light timber frame topped with Styrofoam but this time, at least, I have made some provision for a backdrop rather than tying to install it retrospectively. Previously, I had glued Homasote onto the stryofoam to act as a track bed. When my supply of Homasote ran out, I switched to canite and this performed equally as well. However, canite seems to be scarce these days and quite expensive so I am contemplating other options. Thick cork (possibly cork tiles) or perhaps mdf overlaid with a thinner cork may be the solution this time.

Unfortunately, this is where things will stay for the next month or so as another activity claims 100% of my time, and then it will be the lead up to Christmas, and then ..... The old enemy is alive and well!

In the meantime, rail traffic at Philip's Creek has now grid locked as about half of the rolling stock was moved from the staging area. If construction drags on too long, some of these may be have to be boxed up to permit some form of operation. 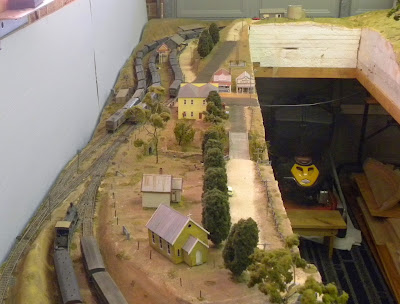