My first workings of 5069, the new Eureka 50 class, indicated that there may be few challenges with the tender particularly when operating the locomotive tender first. My first attempt to bring a rake of LCHs and CCHs to the Philip's Creek coal mine tender first resulted in two minor derailments of the tender and some hesitancy of the locomotive when moving through the old Atlas points with about 20mm of dead track on each. The problems that I experienced seemed to confirm. in my mind, my initial impression that the tender needed some extra weight.('Eureka 50 Class - Early Impressions'). However the issue may not be quite that simple! 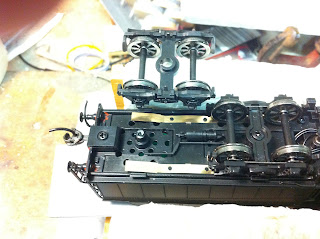 The pick up arrangement for the tender is shown on the photo opposite. Brass strips fixed to the tender base make contact with lugs on each bogie to convey current from the track to the circuit board and decoder inside the tender. For this arrangement to be effective, there does need to be sufficient weight in the tender to ensure good contact with the track.

Similarly, there also needs to be sufficient weight to ensure that the realistic flanges do their job and keep the wheels on the track as each bogie moves through a point. However, it has been suggested to me that the pivoting of the bogie may be impeded by the friction (albeit ever so slight) between the lugs on the bogie and the metal strip on the tender. So, here we seem to be caught in a dilemma because that contact is necessary for the electrical pick-ups on the tender to function.

I have decided to approach this in two stages, the first being to add additional weight to the tender and then, only if necessary, install an alternate means of electrical contact between the bogie and the tender chassis. This post focuses on the first step only. 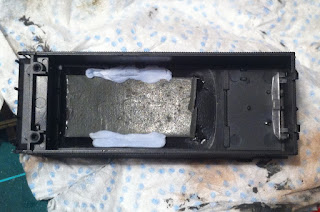 provides guidance on how to remove the top of the tender. Having done that, my first thought was to add a strip of lead on the inside running the full length of the tender. However, a dummy fit with an equivalent piece of styrene felt as if I was applying pressure to the wires coming out of the top of the circuit board. Instead, I decided to glue a strip of lead into the space provided by the coal moulding. It was glued with super glue and then some blue-tack was added to assist the adhesion. I then glued a strip of very thin styrene beneath it to act as an insulator between the lead and the circuit board should the lead come adrift. I know, probably an overkill with multiple redundancies. 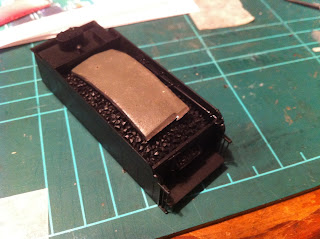 I then added a further strip of lead to the top of the coal in the tender. The photo opposite is a good example of how some colours can change when photographed. The lead is actually a grey colour, not the bronze shade that is shown in the photo. Coal was added to the cover the lead although as can be seen from the photo below some extra coal is still necessary. However, I won't do that until after the locomotive has been weathered. I'll probably make it a fairly full load which may mean moving the apex of the coal more toward the centre of the tender than it is at present.

The results of the early runs after the additional of the extra weight are positive with the instances of the hesitancy reduced and no derailments of the tender bogies to date. However, the real test will come when it's time to move the full coal wagons to Port Waratah. 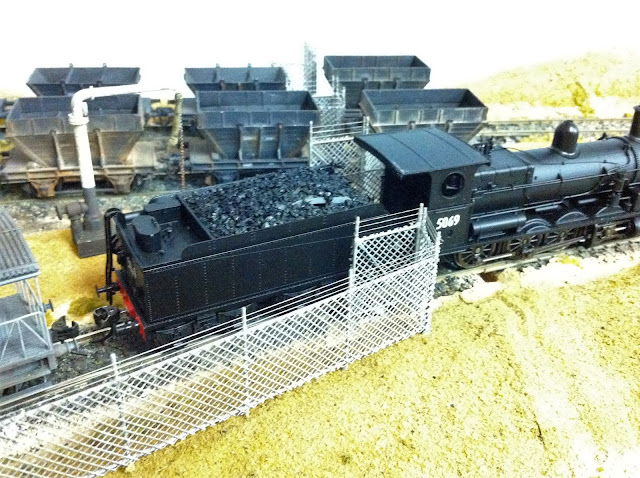 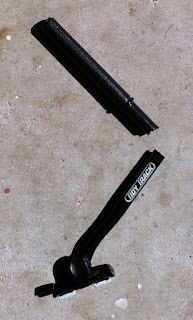 Some readers will recall that I wrote about the Woodland Scenics 'Tidy Track' and another wheel cleaning product in two posts several years ago. Well, the 'Tidy Track' continued to deliver sterling service - until it broke a few weeks ago! For a little while, I tried to persevere with a shorter handle, but with one telegraph pole broken and some close calls with signals, it was time to do something about it.

I'm sure the people from Woodland Scenics would say that the failure was as a result of misuse.  In reality, it probably was a combination of fatigue and too much downward force creating a stress beyond what the plastic handle could withstand. But, after just two and half years, it's still a bit disappointing.  However, it has been a  useful tool, too useful to consign to the rubbish bin. So the search was on for a suitable repair.

So far three possible solutions have been considered. The first two involve the use of a short length of heavy duty conduit as a sleeve and the third uses a piece of timber to replace the plastic handle.

The first attempt, hereafter referred to as Plan A, involved an attempt to glue the original handle inside the conduit.As with most Plan As, it didn't work too well. The concept of the conduit as a method of splicing the handle together worked OK but the glue failed when the tool was pushed forward. It might have been a different story, if I hadn't tried the make the overall handle longer than it had previously been.

So on to Plan B. The conduit was the same but this time, I drilled and inserted two screws, one through each of the remnant parts of the handle. So far, this arrangement seems to be working and the handle is a bit longer than previously.

However, if Plan B does not work over time, Plan C will be the replacement of a whole handle with a piece of timber. The problem with this option may be the loss of some flexibility in the head/handle interface.


Time will tell but a least the track is getting cleaned, AND the scenery is not being damaged! 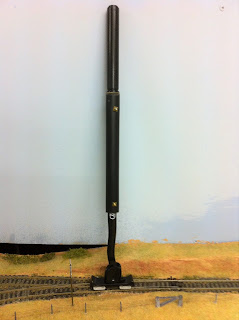 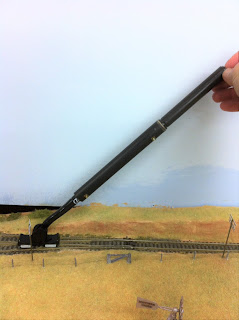