Bringing a Jumbo into service


For someone who proports  to model the NSW prototype in the late 1960s and early 1970s, there is a distinctly non prototypical balance in the relative quantities of  my steam and diesel fleets. The quantity of steam locomotives, while not large, is significantly greater than the number of diesels. Hardly the situation that existed in the dying days of steam in NSW! One could say that this reflects where the heart is but in reality, I also have a soft spot for some of  the early diesels, particularly the Alcos that were in service during my modelling time period. 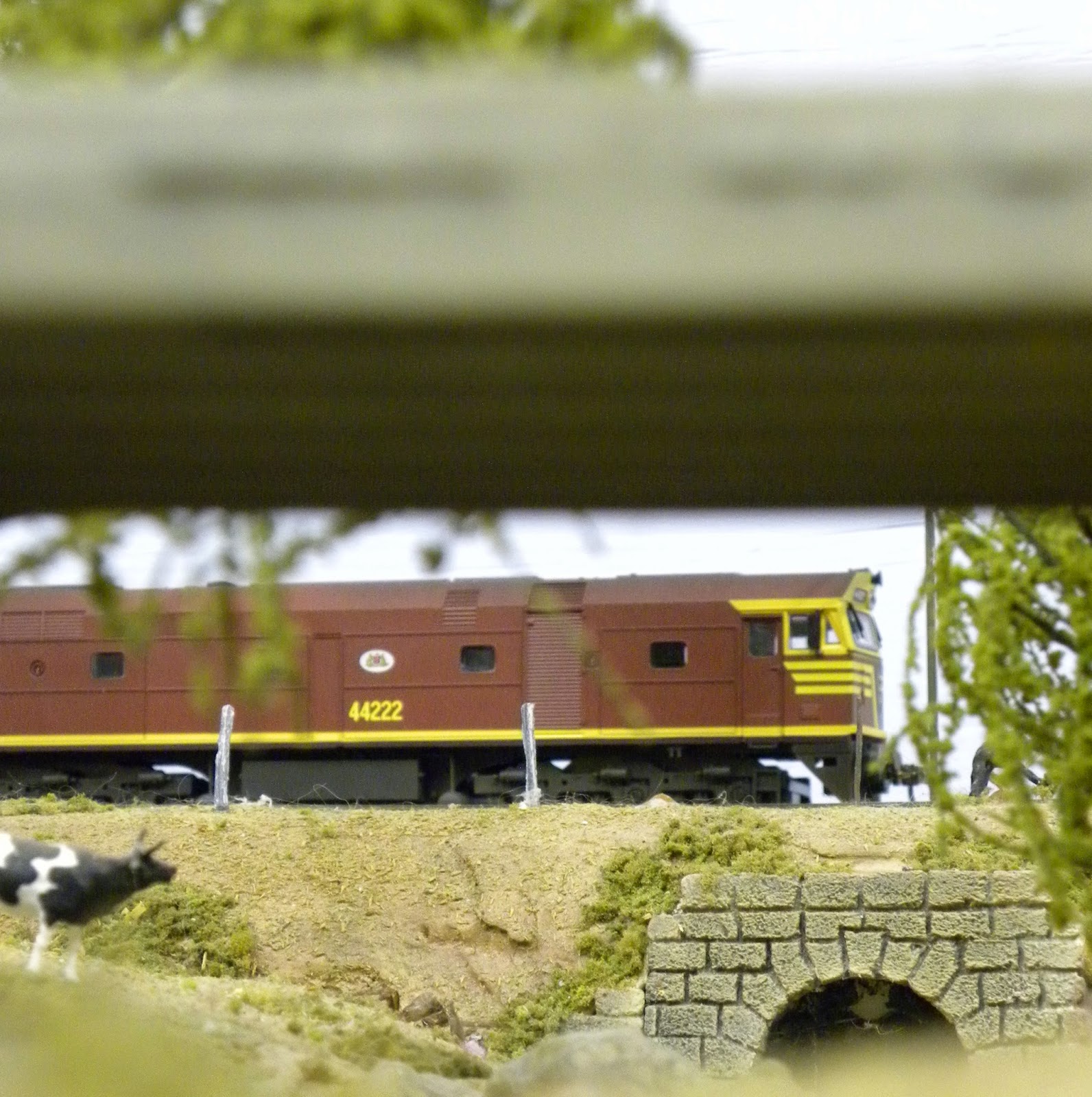 Until recently, the diesel fleet consisted of just one 44 class and two 48 class diesels. However, this year, I am hoping to redress the balance with the purchase of an Auscision Model 45 class, ordered earlier this year, and the Trainorama 48 class that was ordered back in 2008. However, the first step in this expansion program occurred recently with the purchase of the recently rereleased Austrains 442 class locomotive. For non NSW readers, these were given the nickname Jumbo, because, according to Wikipedia, "their 1971 delivery coinciding with that of Qantas' first Boeing 747". It is a big locomotive in comparison to the 44 class and I suppose it's a similar to the 747s being so much larger than anything else then in service.

The 442 comes fitted with an 8 pin plug to facilitate DCC connection. The fitting of a basic TCS decoder was achieved without difficulty and then it was time for programming before the unit entered service. Not so, there was a short circuit as soon as the locomotive hit the programming track !! At first I suspected the decoder but Ian at Hobbyland Hornsby, where I purchased the locomotive, showed me that the plug had been wired incorrectly. He corrected the problem with a minimum of fuss. Thanks Ian

For something straight out of the box, this should not have happened. Apparently the problem was not confined to the individual model that I purchased. 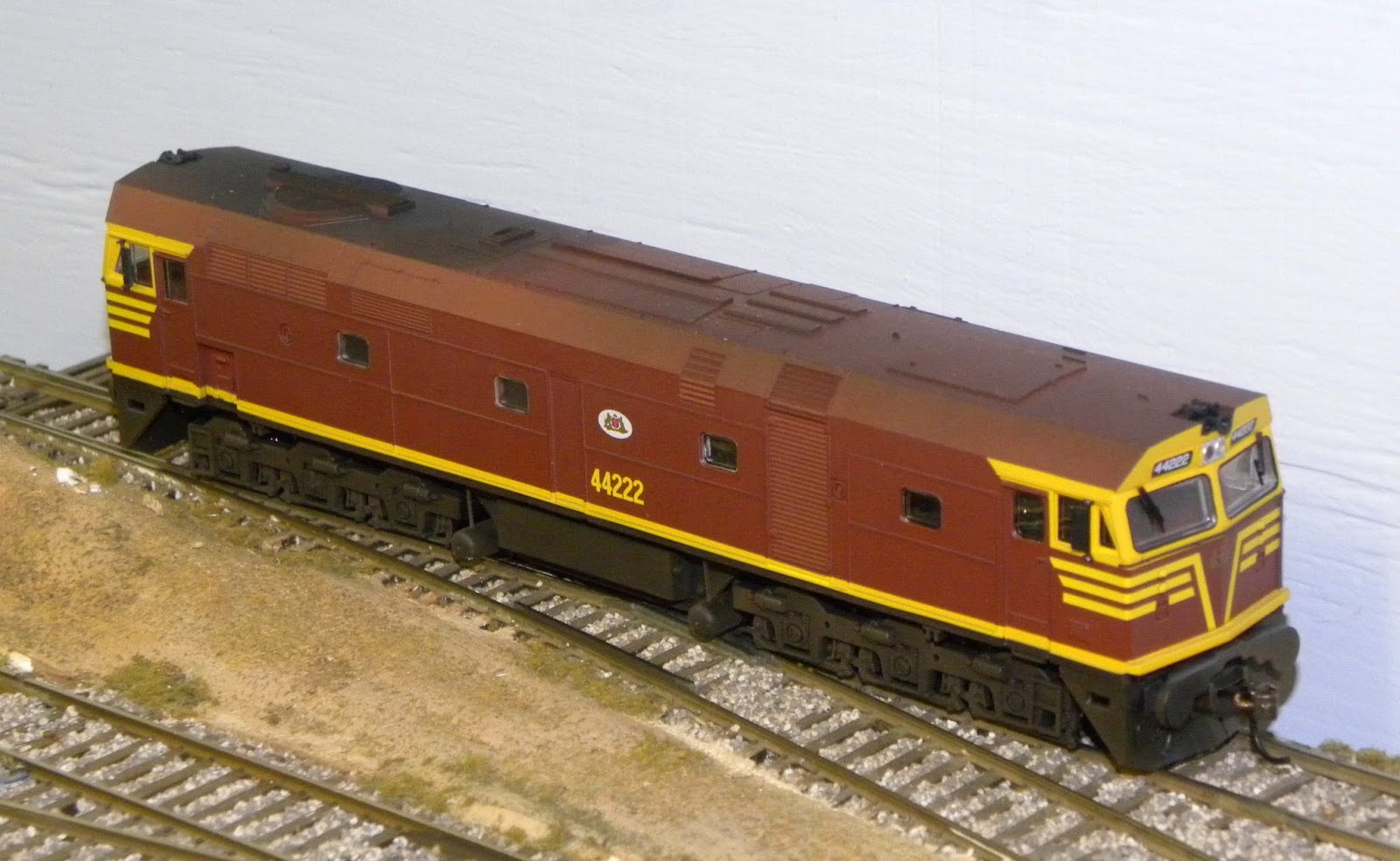 Introduced between 1971 and 1973, the Jumbos straddle the extreme right of my modelling period. I understand that my locomotive 44222 was completed in March 1972 and probably entered service shortly afterwards. Therefore, any appearance on Philip's Creek must show a locomotive in an almost new condition, and, as such, weathering has been kept to a minimum. 44222 received light sprays of Humbrol rust wash around the chassis, a coat of clear matt to remove the shine on the body and a little soot on the roof.

I appreciate that there are enhancements that could be made to this model but they can wait for a while. Now that it is in service, the locomotive runs well although its operation has been impeded by frequent line closures to facilitate landscaping activities on the new module. There are also a few places where tolerances and clearances need to be fine-tuned. 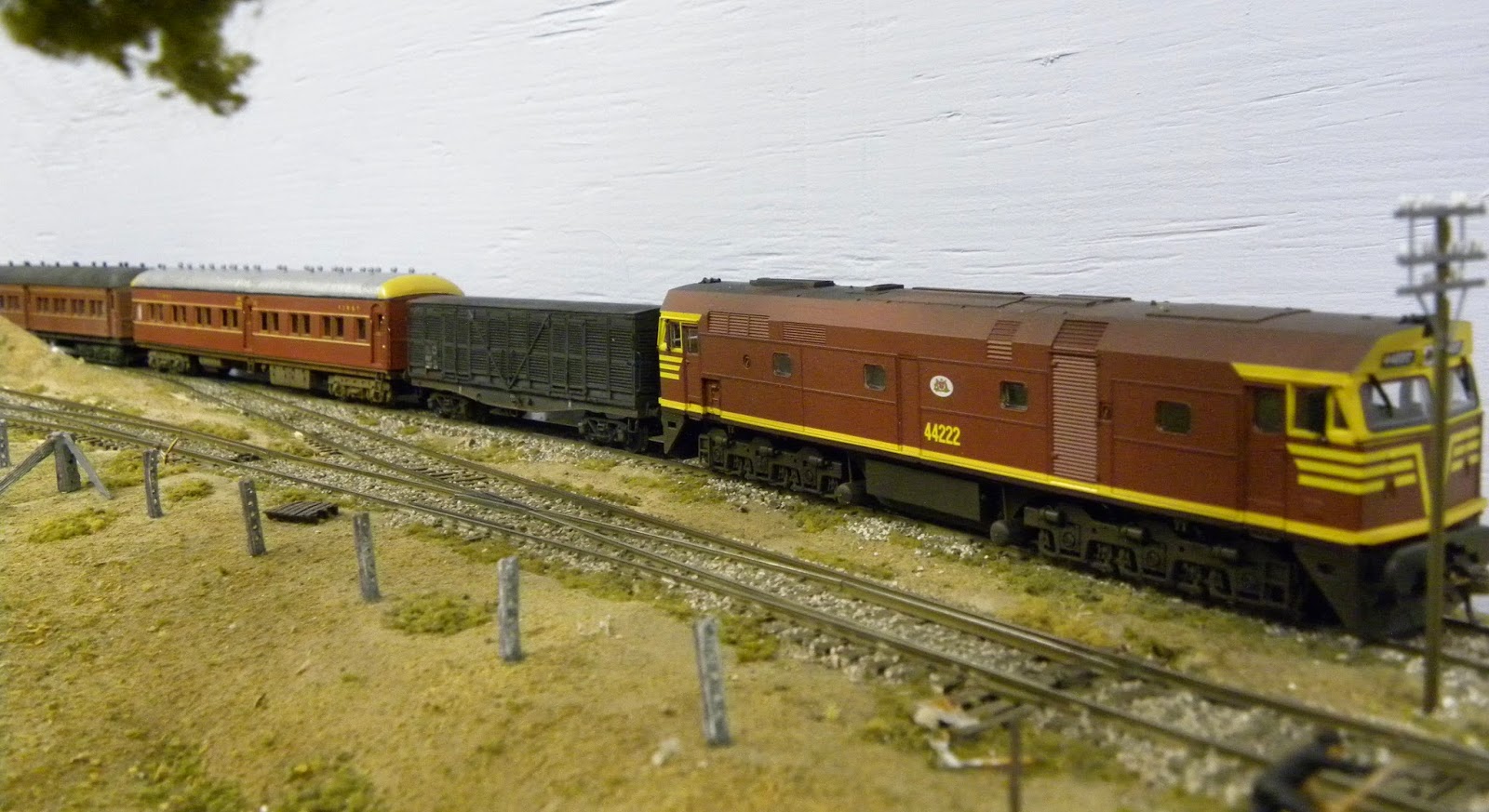 Now, I just need to complete the acquisition program. There's a good chance that the 45 class will arrive and maybe, just maybe, the 48 class will finally get here. 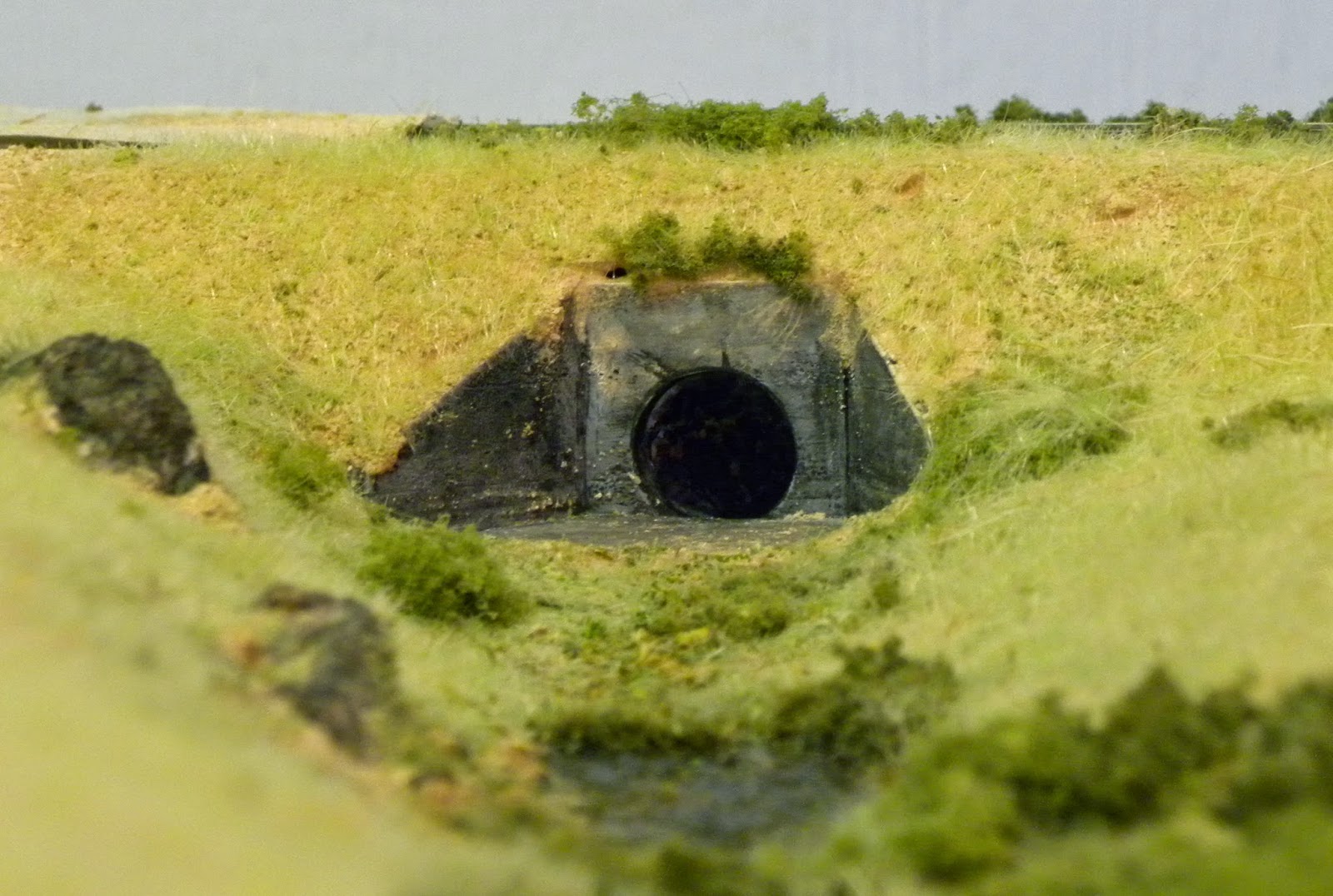 There is nothing more ordinary than a culvert! They have to be the most ubiquitous means of water or gap crossing for both the road and rail but most of the time, they are completely unnoticed by people who cross them.

Over the last few weeks, I have been installing two culverts as part of the undulating terrain on the new module. While the siting of these structures is fairly obvious, there is one real life design feature that should be reflected in any model of a culvert. I am speaking about the need for sufficient cover of  earth over the top of the pipe. The compacted material above the culvert spreads the loads on the pipe and prevents crushing. In my earlier working life, the normal rule was that the minimum cover should be the greater of 600mm or half of the pipe diameter. While this metric related to metal or Armco culverts under roads, the concepts are similar. Speaking to a mate still working in the track maintenance industry, he suggests that with the current train loads, the minimum cover requirement may be greater. However, I suggest that for the purposes of railway modelling, the cover over culvert must look substantial.

The first culvert to be installed (a single barrel) was an old Woodland Scenics plaster kit. I had originally intended to install it on Philip's Creek. However, I subsequently found an older style headwall reminiscent of the type used on the Northern Line near Normanhurst where I grew up. So the Woodland Scenics  kit stayed unused till now.

For the second culvert, I wanted to model a broader less well defined creek, and so decided to use a multi barrel arrangement. This had to be scratch built. 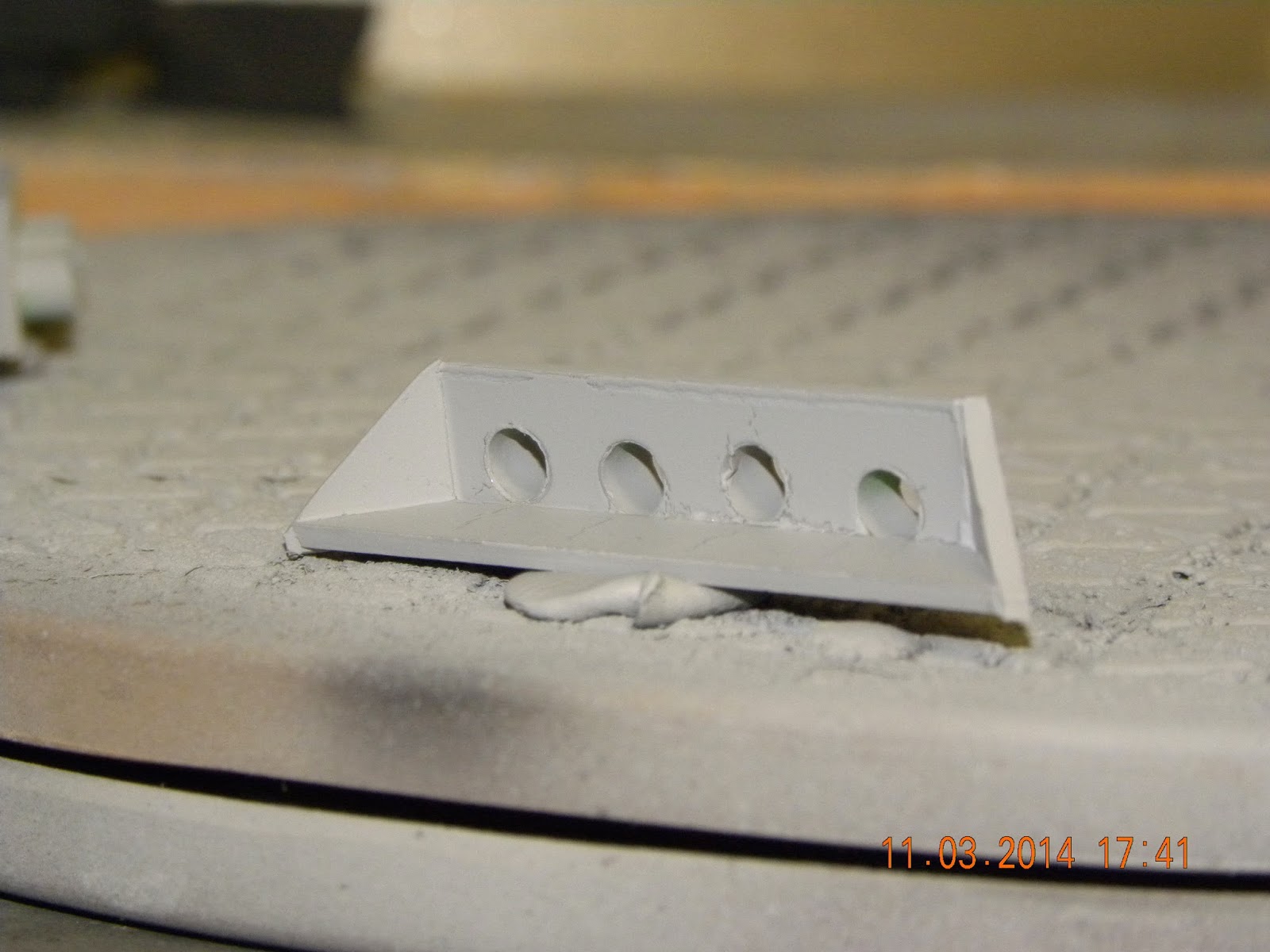 I was able locate a drinking straw that measured about 450mm or 18" in HO scale so this became the diameter of my multi barrel culvert. Personally, in 1:1 scale, I would not use a culvert diameter below 600mm as there is too great a potential for blockage. However, in 1:87, this provides an opportunity for a cameo scene with a maintenance team working to clear the culvert.


The headwalls were constructed from styrene sheet using typical dimensions found on page 42 of the Rocla Product Guide (http://www.rocla.com.au/ProductGuide/) 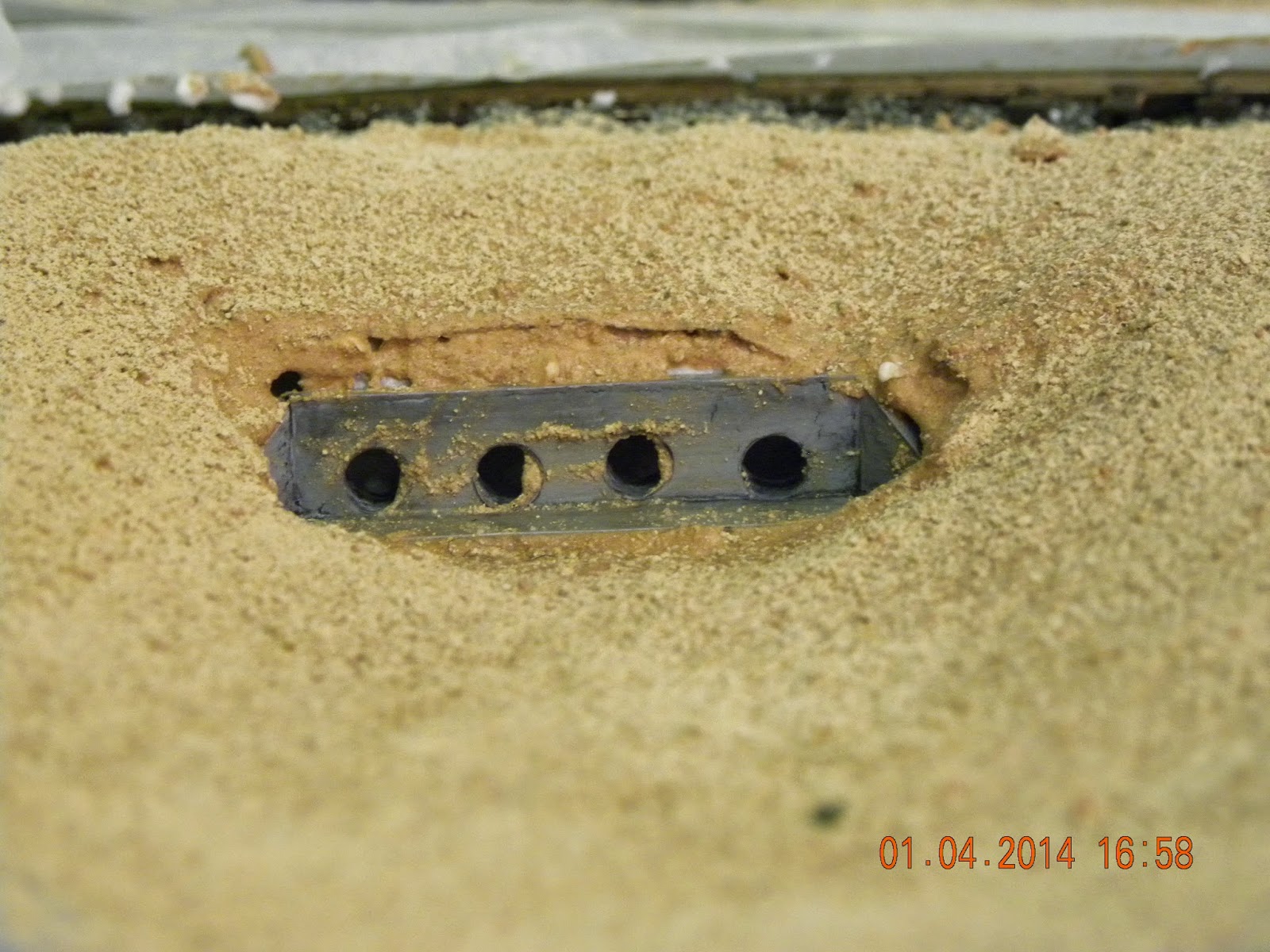 A 5mm length of the drinking straw was inserted in each opening. After a grey primer coat, the headwalls were given several washes using soft pastels and  Isocol Rubbing Alcohol. The inside of each opening was painted black as was the Styrofoam behind the culvert headwall.

The photo opposite shows the headwall installed but with grasses and foliage yet to be added.

As I said at the start, these are very ordinary and simple structures, but the humble culvert is something that adds to the overall scenic impression that I am seeking to represent.

As a footnote, I have recently become aware of a range of brick culvert headwalls manufactured by Keiran Ryan (http://www.shapeways.com/model/938743/3-foot-brick-culvert-ho-scale-3.html?li=shop-results&materialId=61). These look particularly impressive, representing earlier designs that were used when many of the railway lines were first constructed. The type of headwalls I have shown in this post are reinforced concrete using designs that probably originate in the 1960s. The reinforced concrete solution would have been used to replace the earlier types of headwalls if they failed. That said, I understand that many of the earlier designs are still in place to this day.