This One's for Harry

Harry is my wife's great nephew. He is six years old and, at this point in his life, very keen on trains. How long this fascination will last remains to be seen, but for the moment, his interest is very strong. While he has his own train set and presumably plays with it frequently, whenever he visits our place, a request to look at Philip's Creek quickly follows. Any excuse to show off Philip's Creek is always welcomed and during his most recent visit, we again ran a few trains.

What made this visit different was that Harry took quite a shine to my models of the 44 class locomotive. They were, in his words, "his favourite locomotives". I have to admit this declaration surprised me somewhat. These days, this class of locomotive is rarely seen in NSW, a long way from the "no fewer than 100"  that were in service in 1968 (Leon Oberg, Locomotives of Australia 5th Edition p300). The majority were scrapped or sold long before Harry was born, so I can only assume his liking for the 44s is because of what he has seen on Philip's Creek.

The locomotives roster for Philip's Creek includes two 44 class, 4473 and 4485. Both are Trainorama models from the original run, 4485 is an unpowered version. I notice that Trainorama has just announced another production run. When I told Santa the likely cost, he just about had a heart attack. So even if the timing of the new release had aligned with Christmas, it's unlikely Harry would have received one as a gift. That said, models like this are not toys and Harry is still too young for a model of that detail.

What I omitted to mention at the time is the possible second hand market, potentially the old Lima version. In 2019, I'll have to keep watch on Ebay to see if something, probably in fairly original condition, is offered at a reasonable price. In the meantime, for Harry (and anyone else who may be interested) I have included a few photos of 4473 and 4485 in action around Philip's Creek to tide him over until his next visit.

Finally, as 2018 draws to a close and this is my final post for the year, I'd like to take the opportunity to wish all readers  a Merry Christmas and a very happy 2019 for you and your family.


The first rays of the morning sun indicate that 4473 and the north bound Glenn Innes Mail are running very late. 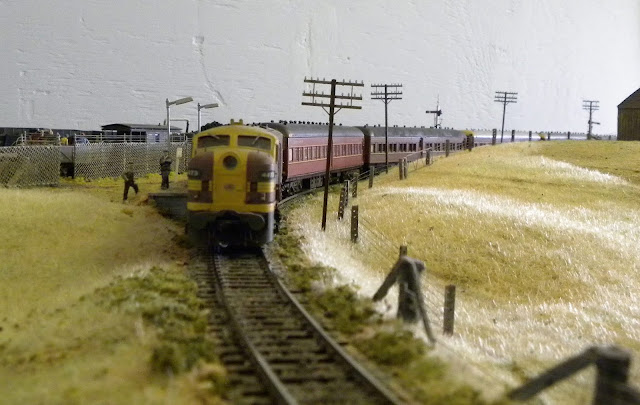 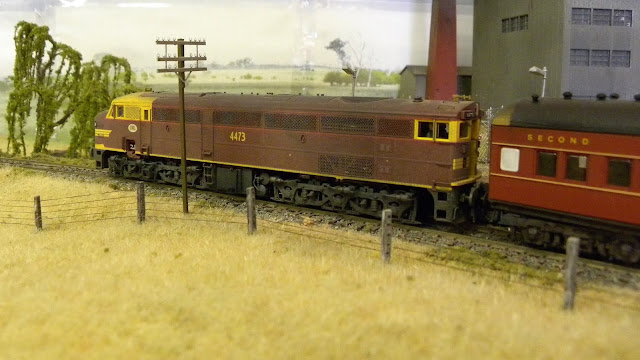 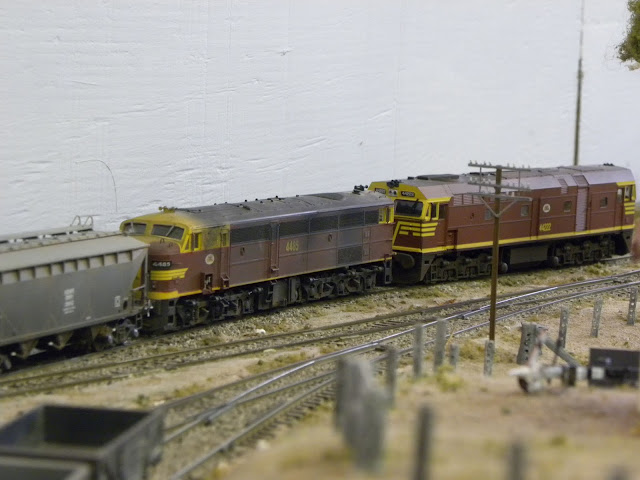 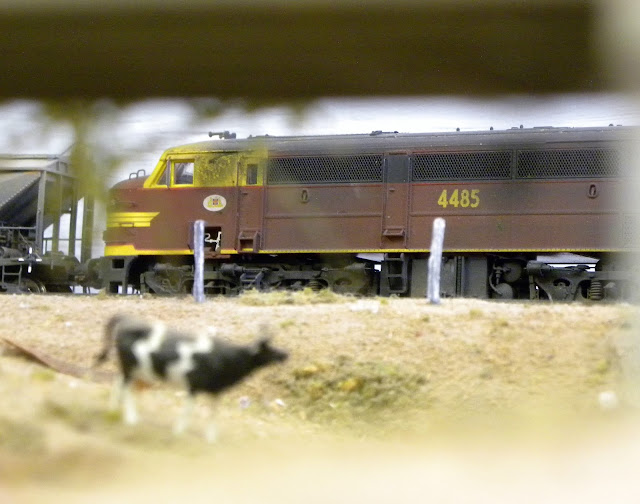 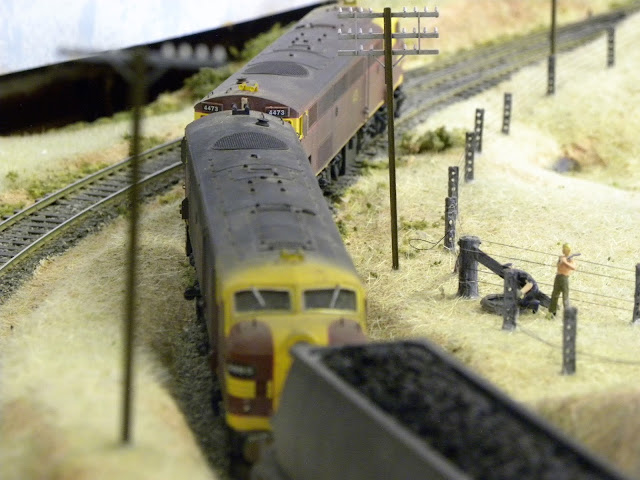 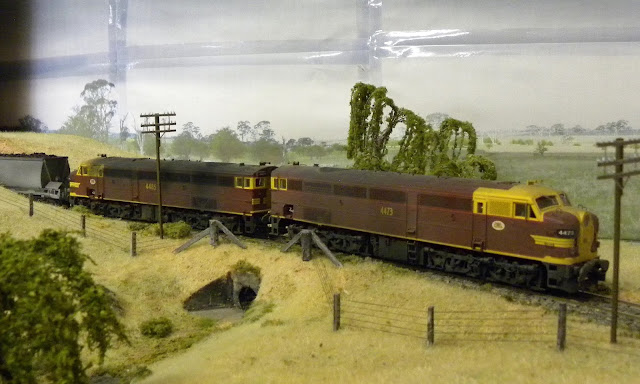 
Again, another distraction has slowed progress on Philip's Creek. This time, it was the threat of a partial ceiling collapse in the garage that motivated this interruption. The genesis of this problem was a piece of poor design detailing when the our house was constructed about 15 years ago. The consequence of this was that water leaked into the garage roof space periodically and damaged the ceiling gyprock. While I had taken action to mitigate future leaks, part of the ceiling was significantly water damaged and was gradually sagging under its own weight. The last thing that I wanted was the ceiling falling onto the car or, even worse, the corner of Philip's Creek that I had just completed. 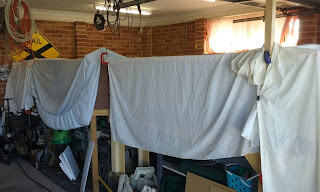 It was time the 'bite the bullet' and fix it. But as anyone who has done this type of work will tell you, the level of dust generated is significant, so some preliminary protective work on the layout was necessary. All of the locomotives spent the last few weeks in the house and I draped some drop sheets over that part of the layout closest to the damaged gyprock. All of the rolling stock was either hidden under the drop sheets or moved to the far reaches of the layout where I thought any generated dust would not reach. WRONG!

The drop sheets worked but by the time I had finished sanding the joints between the gyprock sheets, a layer of fine white dust had settled over any exposed part of the layout, and everything else in the garage for that matter. It wasn't quite a winter wonderland scene but there was an obvious 'whiter shade of pale' to paraphrase the old Procal Harum song. A significant clean-up was necessary. 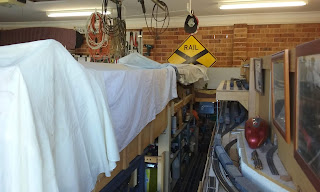 This process took the best part of a day. The photo opposite shows the early stage of this activity with the red vacuum cleaner just visible on the lower right. Each wagon and carriage got a few blasts of compressed air as did anything else that could be lifted off the layout. I vacuumed what I could from the scenery and the track got a vacuum and a good work over with the track cleaning tool. I was pleasantly surprised at the lack of damage. Only one telegraph pole required repair. Trains started rolling again on Tuesday.

However, the time was not completely lost as I managed to complete a few small modelling projects. One of these was the construction of a Uneek yard crane for Kingston Plains. This has been combined with an old Weico model of a Ford F100. Wikipedia suggests that this version was manufactured for the Australian market around the late 1950s. After at least 10 years, any self respecting farmer would have done something to improve its carrying capability so I thought it was reasonable to replace the small cargo area with a larger tray.The inspiration for this scene is a photo in Volume 4 of Wheatley brother's book, Railway Portraits, showing two large tractor tyres on the platform of Merriwa station in 1969. The problem for Fred is to decide if his suspension can handle the weight of these two wheels.

Number plates have yet to be added to the Ford and the backdrop behind the Kingston Plains module is still a 'work in progress'! 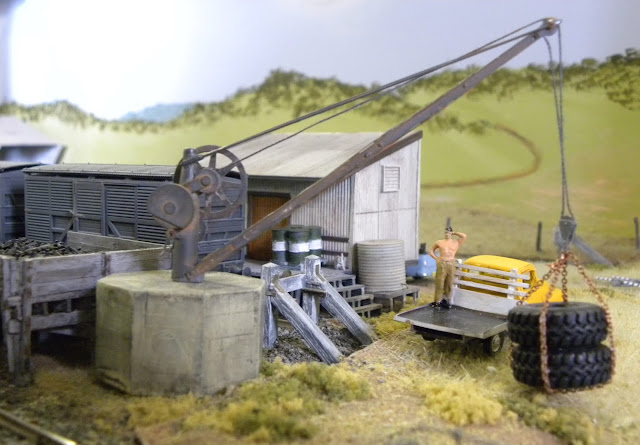 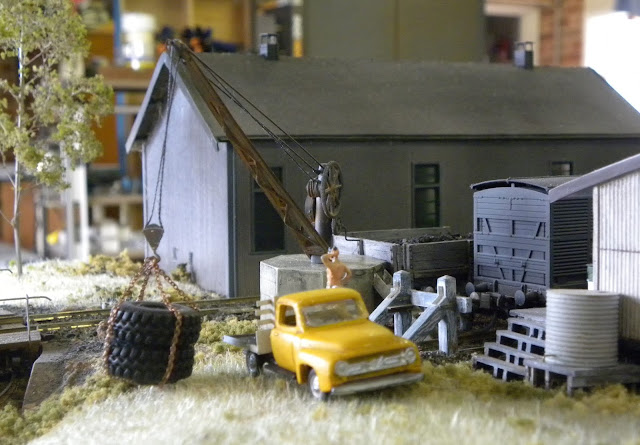 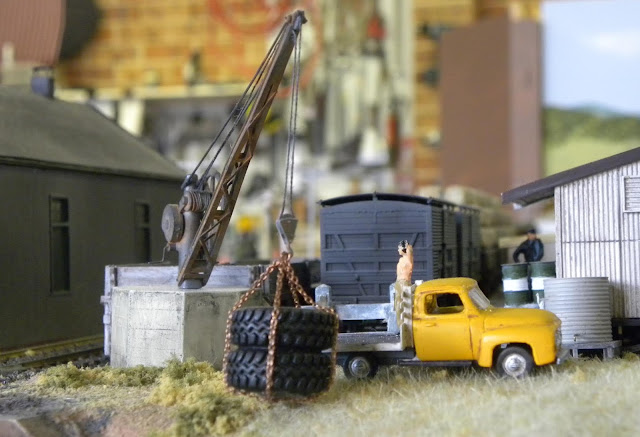 Finally getting to the Backdrops

Over the past few months when not getting distracted, I have made a slow start in addressing one of the major unfinished aspects of Philip's Creek, the lack of backdrops around most of the layout. This may be the first of several posts on this topic as I work my way around seeking to depth to what is otherwise a very narrow strip of ground, probably little more than 50m wide in 1:1 scale.

The first obvious question, why the hell didn't I address this in an orderly planned way before I started building the layout? The short answer is that I was too bloody impatient and wanted to get track down and run trains. As a plea in mitigation, the layout evolved over time to fit the available space. When it started in 1996, Philip's Creek was a continuous run loop and the viewing direction was inwards. A few years later, it became a point to point operation and the viewing direction was reversed as the layout started to run around walls. So even if I had installed a backdrop before laying track, it would be been superseded as the layout evolved.

Currently, the two primary methods of installing backdrops are to glue or fix some combination of panorama photos or to paint an appropriate scene on a blank sheet of timber.  Having said this, I can foresee the day when both methods will be  a thing of the past and we have some combination of wide screens behind the layout showing a backdrop where clouds move across the sky as well as vehicles, people and animals move in the background, all linked with appropriate sounds.

But back to the present, I wrestled with the decision as to whether to install a photo panorama or attempt to paint a scene. I believe that a good photo panorama, properly scaled provides the ultimate backdrop. However, these work best if installed first before track is laid. Terrain features such as creeks and hills can then be aligned with the panorama. As I said, I didn't have willpower to do that so, in essence, I'm playing 'catch up football' . A few years ago, I did experiment with a panorama which I photographed near Armidale. After some 'photoshop' work I did a test printout, taped it together and installed it near the Phillip's Creek coal mine. I was able to align a creek but it didn't seem to fit with other terrain features. For me, this represents the ultimate problem with a photo backdrop, the challenge of matching the backdrop with existing topography already in place on the layout such as the Hall's Creek module shown below.

So I decided to have a go at painting a back scene. I am certainly no Michelangelo or Albert Namatjira but there is plenty of advice around. There is a great article in Issue 6 of the Australian Journal of Railway Modelling together with numerous items and video on the internet.

One consistent theme in most of these is the need to work from back to front or the distant to the foreground. Another is the need to dab with a bristle brush  rather than paint when seeking to create distant vegetation. All part of the learning experience. 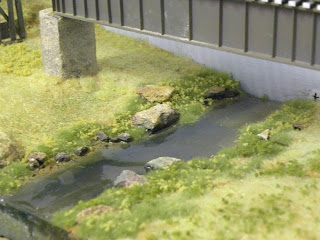 As the painting moved to the foreground, there was the challenge of how to transition horizontal elements onto a vertical face which can be viewed from several angles without loss of perspective. For this module, the creek is that major element. 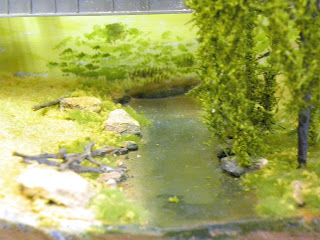 I sought to achieve this by representing a bend in the creek which then disappeared behind folds in the terrain. I painted a small portion of water on the backdrop which then appeared to disappear behind other hills. 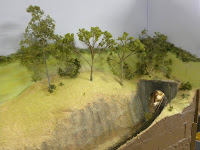 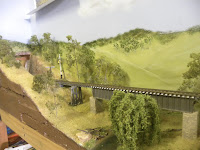 The other thing that I have actively sought to do is to place trees on the terrain which has the effect of breaking up the backdrop particularly at corners.

The overall view of the module with the completed backdrop is shown below. This is another case where the camera presents a different view from what appears to the Mark 1 eyeball, particularly matching the colour of the terrain with that of the backdrop. The colours seems to be a better match than they appear in the photo below.

I'm reasonably happy with this as a first effort, but I suspect that I have done the easiest one first. The next one, Kingston Plains will probably be more challenging particularly with roads and probably buildings to be included on the backdrop. Work has just started with clouds added and a number of potential scenes identified. More to follow in another post. 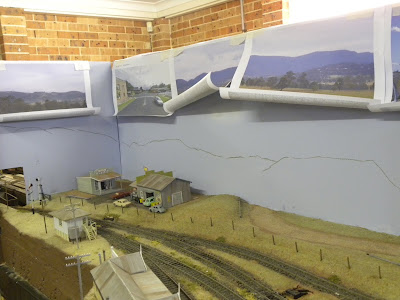