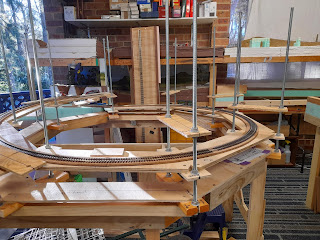 I had intended that this post would detail progress on the Hunter River bridge, but the reality is that work on the bridge has stalled because my primary focus has been continuing to join the dots, specifically, building a helix.

As I described in my most recent post, Philip's Creek, in its new arrangement, is now a two level layout and this means, I need some way to move trains from the lower to upper level and back again. To climb the 500mm between levels would require about 20m of track at a grade of 2.5%. Simply, there is not enough space in a 6m * 2.2m garage to run a visible climb between the two levels.  So there are not too many options other than a helix for continuous running between levels.

A helix is not without problems. A helix does occupy a lot of space. A 600mm radius helix will consume about 1.1m2 of space. This area may not seem to be a lot but when added to other space demands such circulation space and staging areas before we even contemplate sceniced areas of the layout.

Access for cleaning and maintenance in the helix can be a challenge. Often I have seen a helix enclosed so trains are hidden from view as they monotonously go round in circles to gain height. However, this arrangement creates an issue if there is a derailment or when track cleaning is required. There have been horror stories of operators having to climb into the void at the centre of the helix to rectify a problem. I have decided to leave the helix open and accessible.

Another challenge is the combination of a tight curve and grade increasing the load more than it would for either individually. I have been very conscious of this problem and have experimented with likely combinations that will operate on the helix. To date, after being able to run up one and half laps of the helix, there have been no significant problems. 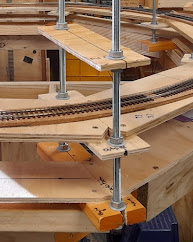 There are many documents and You Tube videos dealing with the design and construction of a helix. Most involve the cutting of circular sections which are then assembled into a helix. I was not too keen to do the necessary cutting of curved shapes and the associated wastage and I certainly didn't want to purchase one of the prefabricated kits available. I decided to try an octagon ring and lay a circular track within the limits of the ring. This has the advantage of simpler cutting of 10mm ply with less wastage. The strips do require some work with a mitre saw to cut each strip to get a 22.5 degree angle at the end. The eight section forming the octagon are screwed to short sections of 6mm ply which serve as a support or saddle at each the eight nodes. To support each level, I used 16 threaded rods, two at each nodes, with nuts and washers used to support each saddle. (see adjacent photo)

I struggled to fit the helix into the space available and had to reduce the radius to what I believe is the absolute minimum, 610mm. To accommodate this radius, the octagon had to have an overall width (A) of 1300mm and each side length (B) of 538.48mm, rounded up to 540mm.

To keep the grade to a reasonable value, I needed to restrict the height between helix levels to around 88mm with a clear distance of 70mm from track to the bottom of the next level. This gives a grade of around 2.3% and require about 5.5 laps. 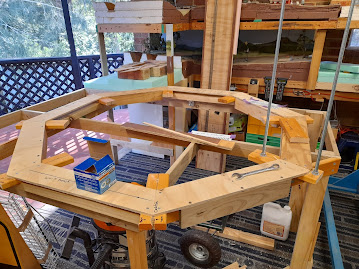 The first octagon serves two purposes. It was the test bed for the construction process and once attached to the layout frame, it forms the foundation of the helix and the base for each of the threaded rods.

One lesson which emerged from this exercise was the need for a slightly wider strip. Originally, I had anticipated using 100mm wide strips but I suspected this may be a bit narrow so increased the width to 125mm.

The bottom circle of track had to include a point (turnout) which will connect to the Mount Windeatt branch line and the upper circle will incorporate a point leading to the Kingston Plains branch line. 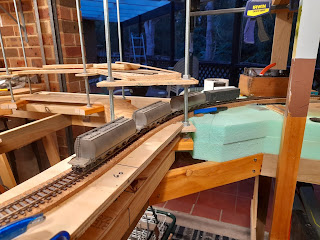 With the first loop in place, I had to lay track from the Yellow Rock module to the helix and continue  into the helix proper. Getting into the helix  required the same tight radius but also a reverse curve. I incorporated a short straight in the hope that it would assist eight wheel steam locomotives to manage this section. Testing to date indicates that this arrangement has worked but it will be  speed restricted.

Once you finish one level of the helix, it is covered, and won't be easily accessible again. So the construction process has been a continual sequence of build/test. To date, I completed two loops with three plus to go. 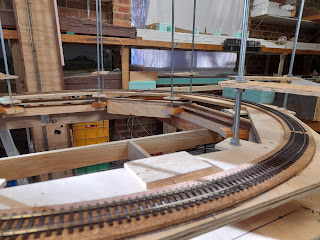 Ian Millard (Liverpool Range) observed that one gets into a sequence or rhythm when building a helix. He's right! But Charlie from the You Tube channel Chadwick said that it's one of the most boring things he has done, and he's also right! Certainly, winding a nut along a threaded rod is a very mundane task, and it has to be done many times.

As I get closer to finishing the helix, I'll post again on a few lesson learnt but it's also time to contemplate the next projects, laying new track around Philip's Creek and installing lift up sections to access the branch lines. More to follow.