100 not out is a great score for any cricketer. Alas for me who was not a good cricketer and almost hopeless batsman, it's something that I could never achieve. However, in the context of this blog, it is something that I can claim as this is my 100th post and still going. Mind you, it took some seven plus years to achieve, more a Geoffrey Boycott type of innings than David Warner. (My apologies to those readers who do not have a cricketing background or who are too young to know who Geoffrey Boycott is). 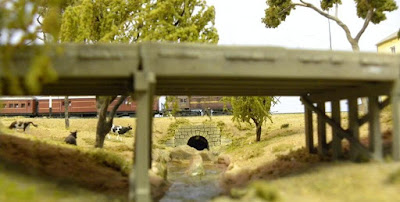 While Philip's Creek had already been in existence since 1996, the blog has tracked its expansion since it ceased its earlier nomadic existence. The photo opposite captures a scene from that earlier period and was the first photo of Philip's Creek published in the blog. It remains one of my favourites.  The three photo montages below show the changes documented in the past 100 posts. The first two photos show the original modules as at 2012 and now. The final slightly larger montage shows the additional modules that have been added in the same period. The montages also show the considerable amount of clutter that has been accumulated and stored under the layout including the lawnmower that appears not to have moved over over seven years. (hint, the yellow cover is very visible in the centre photos) 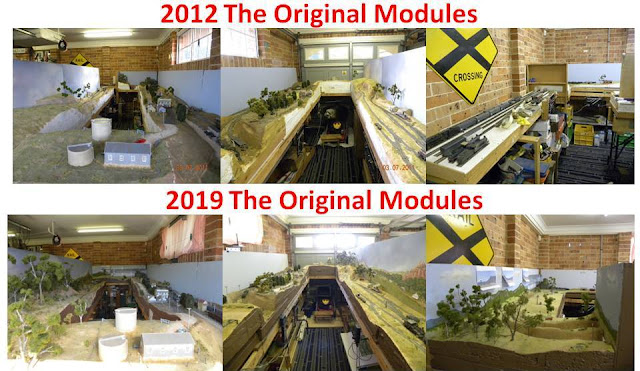 When I started the blog, the locomotive roster consisted of eight locomotives - it is now 17 (including one unpowered 44 class) . Most of these additions were the subject of specific posts as they joined the locomotive roster. Rolling stock has also increased significantly, particularly for block trains. Ready to run models have made a greater presence on the layout but kits together with some conversions still comprise the core of the roster, and many of these have been described in posts.

To the readers of the blog, thank you for your support over the past seven years, a blog is nothing without you. A breakdown of the page views (shown in the table below) over the period yields some interesting results. Given the prototype being modelled on Philip's Creek, the percentage of page views from Australia is expected as is the percentage from the US, noting the popularity of the hobby over there. What is surprising is the number of people interested in the hobby in Russia and to a lesser extent, the Ukraine. 'Привет' and 'привітання'! I hope Google translate has got the right word for 'greetings'. Other bloggers have also noted this trend. The other surprise is the emerging 'Unknown Region' which I have only noticed over the past 12 months or so. I had thought it might be China but online advice suggests that this is incorrect. One of life's little mysteries!

Moving forward, the blog will continue to document developments and changes on Philip's Creek. However, as I have noted in a recent post, in its current location, Philip's Creek has probably reached its physical limit. There will probably be additions to the rolling stock roster as well as a refresh of the  older scenic parts of the layout which  will probably be the subject of future posts. Still we can't predict the future and, if the opportunity presents, blog posts may also address the further expansion of Philip's Creek.

Returning to the cricket analogy, will the blog manage to crack a double century? I don't know but I'll have a go.