This post is a little off topic but, dear reader, I ask that you indulge me in this instance.

My mother passed away about two months ago. It was not unexpected and, at 95, she had had a good innings although her last 10 years were blighted by the scourge of Alzheimer's Disease.  While there are many memories beyond the scope of this blog, I wanted to take a few moments to discuss her contribution to my model railway hobby in general and Philip's Creek in particular.

Many long time participants in the hobby probably acknowledge the contribution that their fathers made in getting them started in the hobby and teaching them some on the necessary 'trade' skills along the way. Certainly, my father helped me in that way, setting up my first layout on a board, wiring it up, building a controller and installing isolating switches. I probably inherited some of his problem solving abilities  and he taught me a few skills along the way although maybe I wasn't paying too much attention when he was showing me how to solder.

Less frequently, we acknowledge our mother's contribution to our hobby. Mum was always supportive of my interest in model railways although wasn't that impressed when I moved from HO to N scale. Perhaps, they were just too small. She was certainly very positive when I returned to HO scale in the mid 1990s with the construction of Philip's Creek. She had something of an eye for realism and, in my childhood, she pushed me to incorporate terrain features onto an otherwise flat featureless baseboard.  More recently, as Philip's Creek was being built, I would periodically show her its progress when she visited. Invariably, Mum's first question would be 'when are you going to install fences and power poles?' Intuitively, I think she appreciated that those mundane items added an extra level of realism to the layout, something I've come to refer to as 'modelling the ordinary'. 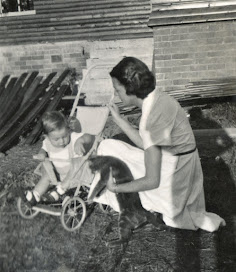 However, there was one other way that Mum made a lasting impact on Philip's Creek but I need to give some background as context. My parents built their first home in the mid 1950s in what was then almost semi rural Normanhurst near Hornsby north of Sydney and it was in this house that I spent my formative years. The home was relatively close to the railway line, the Short North. In those days, electrification ceased at Hornsby and so there was plenty of steam heading north and south including the relatively new, distinctive AD 60 class Garratts. In later years, my mother would tell anybody who listened that the first word I spoke was not 'mummy' or 'daddy' but 'Garratt'. She did have a tendency to exaggerate but a fairly regular activity in that period was for yours truly to be stood on the letterbox where it was possible to look down the street at trains passing through Nornmanhurst Station. If a 60 class was in charge, there was inevitably an exclamation, 'Look Mummy, Garratt!'

Fast forward to the mid 1990s when I said I was going back to HO scale, Mum announced that she wanted to purchase a locomotive for the new layout, and there was only one choice, a Garratt! I was working in the US at the time, so as often happened, Dad was left to make it happen. After a few false starts with the second hand market, Dad purchased a DJH model and had it professionally assembled. My son, who was at a boarding school in Sydney, was enlisted as the courier when he returned to Missouri during the school holidays. And so 6018 joined the roster and has continued to serve since 1997.

Time has moved on, but this story inspired me to create this micro scene as a memorial to Mum and her contribution to Philip's Creek.

Vale Mum. Thanks for everything - not just the Garratt!