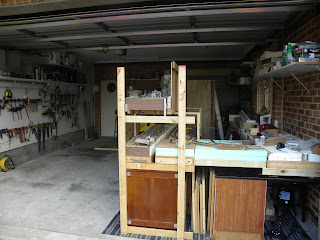 It's taken a while but finally, Philip's Creek is now being unpacked and reassembled. There has been some minor damage, mainly items which broke loose during the move but the effort to box up the modules has paid off. Some other damage was sustained when I installed one module, Kingston Plain, above another, Mount Windeatt. However, these are relatively minor and will be corrected when other landscaping tasks are completed.

Right now, the reassembly is like a game of 3D Tetris as modules are placed where required for version Kellyville. To date the main focus has been on the construction of the support structure to carry the lower level modules and getting sufficient track laid on the lower level so that I can run a few trains over a little distance before I start work on the upper level. Some modules destined for the upper level will have to remain boxed until the appropriate support structures are established.

As I have been reassembling the layout, there have been a few adjustments.

We all learn lessons from our previous efforts and Philip's Creek is no exception. Version Kellyville will have larger staging areas and slightly wider aisles, two issues that caused me problems on version Hornsby 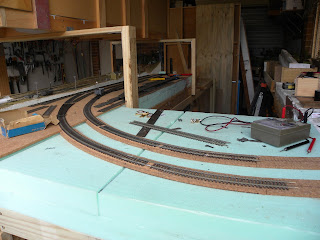 Previously, I had inserted short piece of track over the interface between two modules but this has now changed. Now track will be laid across module joints without any considerable of future demolition. While one should never say 'never', it is very unlikely that Philip's Creek will again be moved by me. The track and scenery has value to me, but I need to acknowledge that the disposable value of the layout is in the locomotives and rolling stock. Therefore, the next time that Philip's Creek is demolished, a skip bin will probably be in close proximity. If, by chance, the person demolishing the layout wants to retain its integrity, the person can use a Dremel tool to cut the track at the module joints. However, more likely, it will be my angle grinder which is used to facilitate demolition. 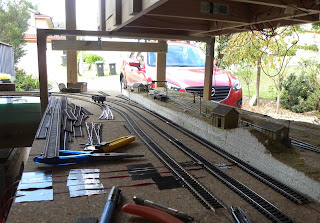 The early work has shown me that I need to be much neater in my wiring underneath the upper level module. Previously, it didn't matter if wires hung below the support frame but no longer. Now any wiring must not be visible when viewing the lower level module.

Lighting for both the upper and lower modules will need to be improved. The need for lighting for the lower level modules is obvious but the lighting in the garage is not too good and I'll need to improve it.

So work continues on a layout which, about two years ago, I foreshadowed was almost complete. Well, not quite!! 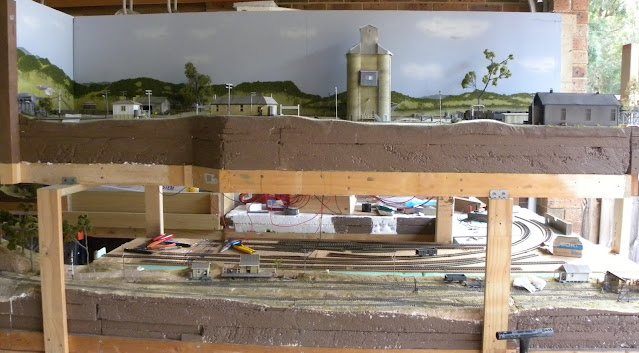