The Inconsistent Pedant - a 38 class at Philip's Creek 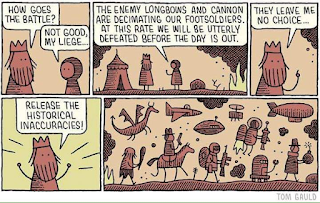 My wife recently showed me this cartoon from the Medieval Mirth and Jollity Facebook page as I am, within the family, well known for my pedantry when it comes to inaccuracies in historically themed movies and TV shows.

My pedantry also impacts Philip's Creek. In a post about eight years ago, I recounted a project where I converted a KB parcel van to MHO guards van, the reverse of what happened in reality ( Back conversion of a KB mail van ). The primary motivation was my understanding that the KB parcel vans were not built until around 1973-74 and as such were on the cusp of my modelling time period, 1967-1973. Similarly, I have avoided purchasing models which were unlikely to have run on the Main North between Singleton and Muswellbrook in that period. At least, that was the policy until the release of the ARM 38 class. I appreciate that this is a budget priced model and there are a few shortcomings but the temptation to own a model of the premier class of NSWGR steam locomotives was too great and I bought one.

I purchased the first model to be released, 3806, resplendent in its original green livery. Had I waited a bit, other models appropriate to my time frame became available. But I didn't know that at the time, so a green livery it was. The problem with this decision was that, by my modelling period, all of the 38 Class but three (3801, 3813 and 3830) were attired with a black livery. I didn't want to undertake a full repaint so I had to focus on 38s which carried a green livery in the late 1960s. I understand that 3813 carried its original livery throughout its life while 3801 and 3830 were repainted in a green livery in the 1960s. Unstreamlined 3806 was never going to become streamlined 3801, so it was down to a choice of two. I had also heard rumours that the 3830 repaint was a slightly different shade of green to that used when the class was introduced, so it came down to a choice of one, 3813. 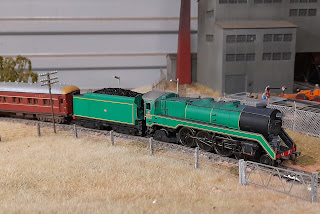 As a minimum, this meant removal of the factory applied decals and the application of new numbers. As usual these days, a You Tube search turned up a multitude of potential procedures. Of these, I decided to try the method described in this clip ( How to renumber a Model Locomotive - Made Easy ) because it seemed to be less abrasive than others. It worked well, particularly for the main numbers on the side and tender although the buffer bar proved a bit more challenging. Replacement decals came from Stephen Johnson Models.

With a bit of weathering and some extra non plastic coal, 3813 was ready to enter service, but there was one further problem. I understand that the 38 class didn't normally operate north of Newcastle because of the potential for track damage. The reality is that I knew this already and it was the primary reason why I had not purchased a 38 class earlier. But therein lies my inconsistency; when tempted with a reasonably priced model, I succumbed to that temptation even though the locomotive did not operate in the area I was modelling. 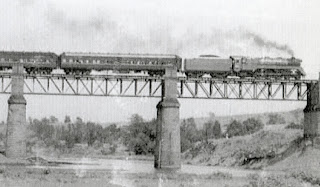 However, a 'get out of jail' card arrived from an unexpected quarter. A few weeks ago, I was reviewing the photos I acquired from the ARHS (NSW) when I was researching the Hunter River Bridge at Singleton. I found two photos showing two different 38 Class locomotives crossing the bridge. (ARHSnsw RRC 041186.jpg and ARHSnsw RRC 041186.jpg). I presume these were probably ARHS tours but, at least, they indicate that 38s did  occasionally travel further north of the Hunter and probably at least up to Muswellbrook.

So, the Philip's Creek operating schedule has now been adjusted to include an occasional tour train hauled, of course, by 3813 and, of course, the pedant lives on. 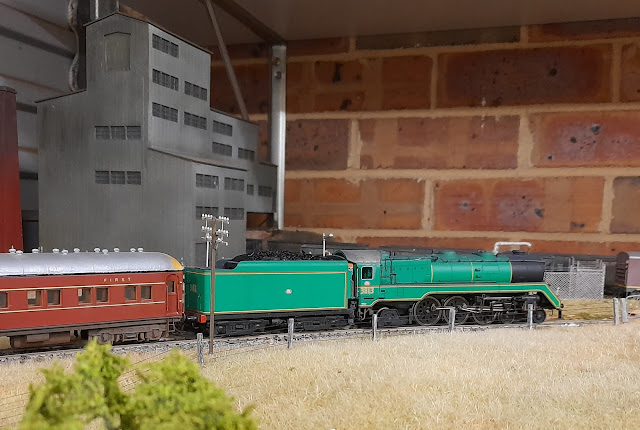